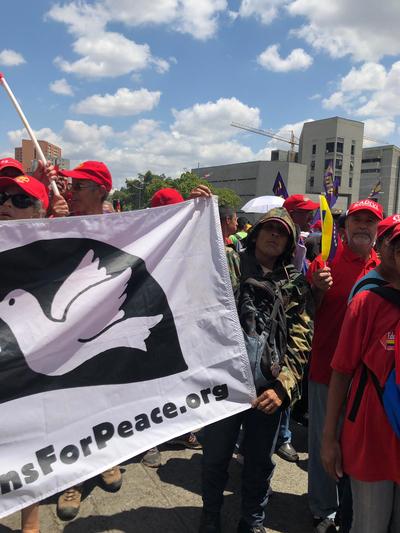 Former VFP Board member Dan Shea and I had the honor of representing Veterans For Peace on a recent U.S./Canada peace delegation to Venezuela, organized by the U.S. Peace Council.  The purpose of the delegation was to express our solidarity with the Venezuelan people and their elected government, which is resisting a multi-pronged attack from right wing oligarchs supported by the U.S. government.

The Trump administration has openly trumpeted its intentions to overthrow the democratically elected socialist-leaning government of Venezuela and replace it with a right wing government that will collaborate with U.S. corporations to plunder the largest known oil reserves in the country, along with huge deposits of gold, diamonds and rare minerals (hence the interest of Canada and its huge mining companies).

The delegation’s arrival to Venezuela’s capital Caracas was hampered by another U.S. attack – this time on the nation’s electrical grid – which caused a nationwide blackout that went on for 6 days.  The Venezuelan government says it has evidence that this was a cyber attack initiated from Chicago and Houston. There were simultaneous electro-magnetic attacks and bombs at several key generating stations.  The U.S. denies any involvement and Senator Marco Rubio and Secretary of State Mike Pompeo were already gloating as the attack began.  It is certainly true that Venezuela’s electrical grid was already in precarious condition.  This is largely due to years of punishing U.S. sanctions which have crippled Venezuela’s ability to maintain its vital infrastructure.

U.S. Cyber Attack on Electrical Grid Fails to Cause Chaos

If the attack on Venezuela’s electrical grid was intended to cause chaos and unrest, it failed miserably.  If anything, it demonstrated the strong community spirit of the well-organized Venezuelan communities, some of whom began making music and dancing in the dark.  Access to water was a big issue, because the water pumps require electricity.  So the neighborhoods organized themselves in an orderly fashion to make sure everybody had water and food.  The government declared two days of no work and no school, and many people were in the streets, looking relaxed, well-fed, well dressed, and going about their business.  In one neighborhood, we saw a small anti-government demonstration of 20 to 30 people, while hundreds of people strolled by without joining in (or attacking) the protest.

The delegation met with the Ministry of Agriculture, where we learned about the robust urban farming program.  We visited a couple of the impressive community gardening projects and even planted a few seeds. Venezuela is moving rapidly toward food independence – growing all the food that its people need.

We visited a huge barrio of 1-1/2 million people, black and brown, poor and working people, the base of what they call the “Bolivarian Revolution.”  There is Zero support for Trump’s rightwing puppet Juan Guaido in the barrios.  They are very well organized too, into hundreds of community councils.  Armed militias too.  And direct U.S. military intervention would have to contend with great resistance in these neighborhoods.

Our delegation was hosted by the Committee for International Solidarity, a nongovernmental organization which used to be more concerned about solidarity with struggling people in other countries, like Palestine. Now, however, they are organizing international solidarity for Venezuela, as it resists the multi-pronged attack by U.S. imperialism.

We had the honor of meeting a number of people high up in the government, including its Foreign Minister and with President Nicolas Maduro.

President Maduro is a down to earth, a working class, former bus driver and union organizer.  He was very happy to receive our delegation of U.S. and Canadian peace activists.  His wife and son and a newly elected governor were also present.  Maduro told us he was a big basketball fan and watched the games all the time on TV.  He mentioned several teams, including the Boston Celtics, and several players, including Kevin Durant of the Golden State Warriors.  He also said he was a big fan of music from the U.S., particularly Jimi Hendrix!

We spent about an hour and a half discussing the situation in Venezuela and the escalating U.S. economic war against Venezuela.  He said that the U.S. had frozen – or even stolen – 30 Billion Dollars of Venezuela’s assets.

President Maduro said it is extremely important to ward off a U.S. invasion of Venezuela, which would be a great tragedy for the entire region.  But he also very concerned with the economic war – “sanctions” and more - which is really hurting the Venezuelan people. Veterans For Peace must oppose U.S. intervention in all its nefarious forms.

Vietnam combat veteran Dan Shea approached President Maduro after our meeting.  Pulling his two “dog tags” from around his neck, Dan Shea told Nicolas Maduro, “This one is from the Vietnam War and reminds me what we did to Vietnam and I am keeping it. And I want you to have this one from Veterans For Peace. President Maduro is now wearing a Veterans For Peace dog tag with the words, “Committed to abolishing war.” In fact, he has actually tweeted about it.  His son told us he was very moved.

Nicaragua Is Also in the Crosshairs

On my way back from Venezuela, I stopped in Nicaragua for three days.

I met with Vietnam veteran Brian Willson, who lost his legs in 1987 while attempting to stop a train carrying munitions for the U.S. wars in Central America, and now lives in Nicaragua.  We met with several Nicaraguan veterans who are forming a chapter of Veterans For Peace.  They want to unite all the veterans in Nicaragua, including former counter-revolutionary forces, the Contras, to oppose U.S. regime change schemes.

I learned a lot about the U.S. attempts to destabilize the government of Nicaragua, which Trump’s National Security Advisor John Bolton has grouped with Venezuela and Cuba as the “Troika of Tyranny” that has “finally met its match,” thus announcing U.S. plans to overthrow and replace the governments of all three nations.  Their sin?  Putting the needs of their own people above the plans of rapacious U.S. corporations. Our commitment to solidarity with those resisting U.S. intervention in Latin America will only grow in the coming years.