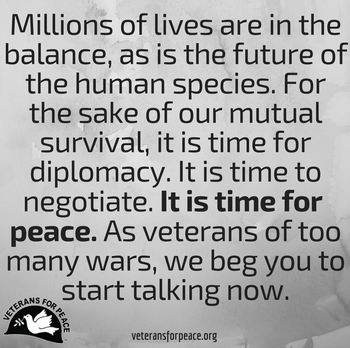 You have both made your point.The world has seen that neither of you will back down before the threats of the other.  For the sake of the world’s people, it is now time for good faith negotiations.

President Trump, you have engaged in reckless rhetoric and threatened to “totally destroy” North Korea with “fire and fury like world has never seen.”  We can tell you right now that you do not speak for millions of veterans in this country.  We know firsthand the horrors of war, and we don’t want to see them again, not even from a distance.

Supreme Leader Kim Jong-un, your threats to target Guam and the United States with nuclear weapons are deeply disturbing. We understand that you must defend your nation from threats of U.S. intervention.  However, your words and actions, like President Trump’s, are causing a very unstable and dangerous situation.

You both have shown the other, and the world, that you have the capability of causing calamitous destruction in a distant country.  You have also shown that through the strategy of “deterrence,” which holds millions of people hostage to the threat of nuclear war, you have so far been able to fend off an attack by the other.

The point has been made.  Now is the time to start backing off.

It is time for each side to clearly state its conditions for negotiations. Not conditions that are deliberately designed to be impossible for the other side to accept.  But conditions that are “negotiable.”  There should be no unilateral “pre-conditions” for talks to begin.  The people of the world are demanding peace.

The name-calling and bluffing game must stop, before someone, somewhere, makes a tragic mistake, a mistake that could never be undone.  Millions of people would die a horrible death, not only in Korea, the U.S. and Japan, but also in Okinawa, Guam, China, Russia - and who knows where else.

Millions of lives are in the balance, as is the future of the human species. For the sake of our mutual survival, it is time for diplomacy.  It is time to negotiate.  It is time for peace.  As veterans of too many wars, we beg you to start talking now.

Please let us know if we might be of assistance.  We will help in any way we can.