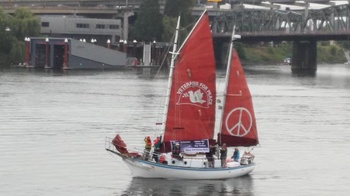 The VFP Golden Rule Project is currently exploring possibilities for sailing on the Gulf coast in Spring 2018. After wintering in San Diego, the Golden Rule would be trucked to Texas. We hope to spend two or three months sailing along the coasts of Texas, Louisiana, Mississippi, Alabama, and Florida. For her journey, she would need crew, people to help fundraise and plan events, advice on the best places to stop, and continuing support. The Golden Rule Project team will be researching, planning, and doing outreach, but past seasons have shown us that nothing is more helpful than local knowledge, existing contacts, and personal relationships.  We will also be emailing local VFP members along our route.  A final decision rests on how much support we find.
Background: In 1958 four brave Quaker peace activists attempted to sail the Golden Rule, a 36-foot wooden ketch, from Los Angeles to the Marshall Islands, to interfere with U.S. nuclear bomb testing in the atmosphere. They were arrested by the U.S. Coast Guard and jailed in Honolulu, but another American family, the Reynolds, sailed their boat, the Phoenix of Hiroshima, into the test zone. The two boats and crews brought worldwide attention to the dangers of radiation in the atmosphere and built support for the Partial Nuclear Test Ban Treaty signed by the U.S., the 55U.K. and the USSR in 1963.
In 2010, the Golden Rule was found abandoned, battered and sunken in Humboldt Bay on the California coast. Local Veterans For Peace chapters, along with Quakers and boat lovers, decided to restore the boat and to resume her original mission. The Golden Rule is now a project of Veterans For Peace and just completed her third season sailing for a nuclear-free world. The theme for 2017 is to support the historic UN Treaty to Ban Nuclear Weapons.


If you can help with any of the following, please email vfpgoldenruleproject@gmail.com: