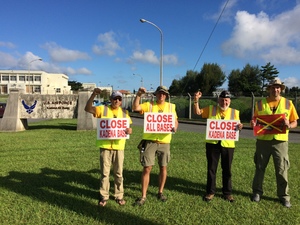 The Veterans For Peace (VFP) delegation of six members from different chapters around the US is traveling to Okinawa to join the local resistance to oppose the expansion of two US military bases. Our delegation consists of a diverse team of war veterans from Iraq, Afghanistan, and Vietnam. Also, three of the members are former US Marines who were stationed on Okinawa during their service.

In Henoko Bay, the USMC wants to expand its Camp Schwab base to build an airstrip, which will destroy an entire ecosystem underneath the bay area. The bay is filled with hundreds of endangered species including the famous Dugong, a beautiful marine mammal. The bay isn’t the only destruction caused by the US military. Okinawa’s fragile democracy is being crushed by the presence of the US military.

A recent poll showed that 80% of the all islanders of Okinawa oppose the expansion of Camp Schwab. As a joint effort made by both governments of Japan and the US, the peoples voice in Okinawa is not only being ignored, but destroyed. Remember, the Status of Forces Agreement (SOFA) between both countries is considered superior to Japan’s own Constitution. In a nutshell, whatever America wants in Japan, America gets in Japan.

Thousands of islanders have been protesting the new base in Henoko for over 12 years. As VFP members, we want to stop the US military from intervening in other nation’s affairs, but as Americans we want Okinawa to strengthen its democracy. The local resistance has welcomed us with open arms. Being Americans, and even former members of the US military, our presence here in Okinawa has had a huge impact.

We’ve had dozens of people thank us personally for traveling and joining the resistance. Despite the idea of the US military taking control over the island without permission from the people, Okinawans love Americans. They understand the distinction between Americans and the American government. In return, we’ve been inspired and motivated by the strength of the islanders. We want to understand them more, provide support, and share their stories back home as well as with other movements of resistance around the world.

The second site where VFP joined protestors is in Takae where new helipads are being constructed. Two helipads already exist and four more are being built. Of the 1.4 million people on the island, 70% of the people oppose the new helipads.

These helipads are built for the USMC V-22 Osprey Helicopters. Despite having a reputation of being an accident-prone helicopter, these Ospreys are still being used by the USMC. US Marines fly these helicopters at a dangerously low altitude disturbing most of the residents of Takae. 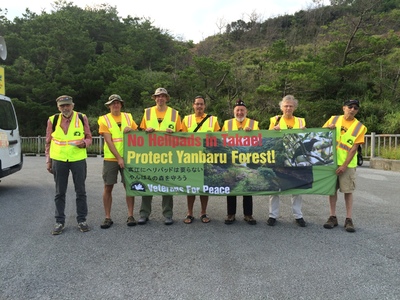 Okinawa’s history with the US military hasn’t been the best relationship one would imagine.  The US military aircraft are known for disturbing school children, crashing into universities, and even service members raping and murdering Okinawan women. In 1995, three US Marines raped and murdered a 12 year-old schoolgirl. In 2004, an Osprey crashed into a university. Just earlier this year a US contractor (ex-marine) raped a woman in Okinawa, and then murdered her. That’s not the only damage being done with the military presence in Okinawa.

Both Americans and military service members are told that these foreign bases stimulate the local economies and provide employment for the local population. It seems quite obvious with soldiers and marines spending their hard-earned money in small businesses just outside the bases, right? But if you take into account the larger context of the sizeable land a military base occupies and replace them with businesses, it changes the idea of stimulating an economy.

Today we met with Masahide Ota, former governor of Okinawa, renowned peace activist, and professor emeritus at the University of the RyuKyus. Ota has heard this story of the military stimulating the economy many times. To test the idea, he conducted a study that completely flipped the idea on its face. He found that when a military base leaves and returns the land to the locals, employment rates increase 10 times that of the military base presence. In addition, income rates increase 100 percent.

The construction of the helipads in Takae and the airstrip in Henoko Bay represent more US troops in Okinawa. With an increased military presence, more incidents are likely to occur. There is no happy ending with more military bases on the island. VFP is now on their second delegation to Okinawa (the first delegation was in December 2015) and will continue to visit Okinawa until these bases and land are given back to the people of Okinawa.

The people of Okinawa are not Japanese. The islanders come from the Ryukyu Kingdom. They speak a different language than the Japanese, developed disparate cultures, and cook their own style of food. The island was annexed by Japan in 1879. From 1945 to 1972, Okinawa was under US territorial control. Since then, Japan has regained control of the island. So, for over a hundred years the people of Okinawa have been dominated by outside forces against their own will.

These efforts by the US to maintain dominance over Okinawa, Japan, and most of Asia has been part of the Pivot to Asia, or now called the Asia Rebalance. The US government and military understand that nearly half of the world’s population resides in Asia. Along with China’s economic and military rise in power, the US strives to maintain dominance in the region by building and expanding bases, increasing personnel and equipment in the region, and increase military aid to allies in Asia. 60% of US military forces have been shifting their attention to Asia since President Obama announced the pivot in November 2011.

VFP recognizes that these actions are dangerous to the world and provocative to nations like China, Russia, and North Korea. With tensions escalating in the Asia-Pacific region, Okinawa is a prime target for America’s enemy (whoever that may be). Much of the reason for the Asia Pivot is due to China’s rise, but Okinawa has never felt threaten by China. Okinawa wouldn’t be a target if not for the 50,000 US troops stationed there. The people of Okinawa are beginning to understand that the US military might not be their friend, who is slowly destroying their democracy, communities, and environment.

Written by Will Griffin (VFP member since 2014)