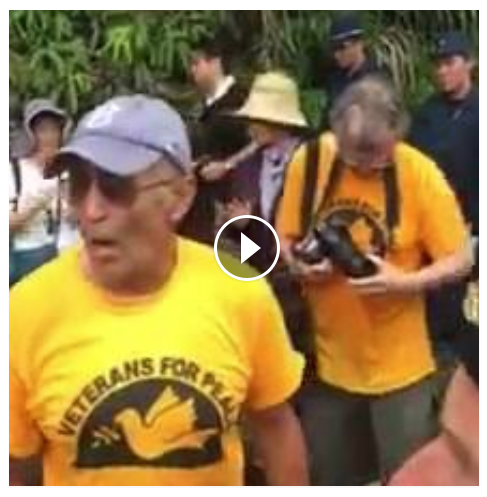 Delegations of Veterans For Peace activists have arrived in Okinawa, Japan, to join protests against the construction of U.S. Marine helipads in Takae, as well as the construction of a new U.S. military base in Henoko. Residents of Okinawa have staged massive protests against both the proposed base and the helipads. Okinawa already houses about 26,000 U.S. troops. The Veterans For Peace delegations arrived as a U.S. marine was arrested in Okinawa for allegedly trying to enter a woman’s apartment. Earlier this summer, protests erupted on Okinawa after a former U.S. marine working as a civilian contractor at a U.S. base was accused of raping and murdering a 20-year-old woman. The victim’s father has called for the removal of all U.S. bases on Okinawa.

Veterans For Peace members Ken Mayers, Tarak Kauff and Mike Hanes sing a rousing rendition of "Lay Down My Sword and Shield" while in the midst of a Japanese police cordon on Okinawa. The VFP team is on Okinawa to stand with, support and learn from Okinawans opposed to the American military presence on Okinawa. Polls show as many as 80% of Okinawans are opposed to the American military bases on their island.