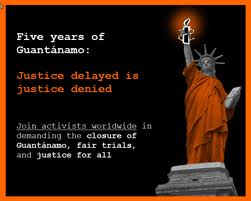 The Senate could soon authorize the first steps to close the military prison at Guantanamo Bay. As currently written, the Senate’s version of the National Defense Authorization Act would give the president new abilities to transfer the 164 remaining prisoners from Guantanamo for trial in the U.S. or to other countries for release.

Unless the current ban on transfers is eased the prison could remain open indefinitely. As Veterans For Peace, we know this would be unjust and immoral.

When this bill comes to the Senate floor as early as today, we expect senators to offer bad amendments to remove these positive provisions. The vote will likely be close, and your senator is one of just a few whose vote could stop these amendments.

Call your Senator today.Tell them to vote no on any amendments that would work to keep the military prison at Guantanamo Bay open.

Closing the military prison at Guantanamo Bay is a moral imperative. Will you help us?

**Use this link to find your elected officials**