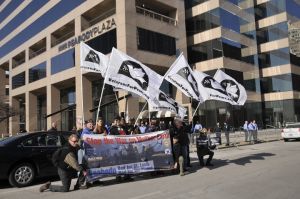 At 11 am, Friday, Jan. 25, members of Veterans For Peace (VFP), headquartered in St. Louis, and other organizations will gather in Kiener Plaza, across from the headquarters of Peabody Energy Corp. to demand that the company:

They are presenting these demands because of concerns such as:

VFP national board member Tarak Kauff explained, “There's a battle going on between huge fossil fuel corporations like Peabody Energy Corp. and a growing public interest grassroots movement. In the end this conflict may matter more than those in Viet Nam, Iraq or Afghanistan because the outcome may determine whether life as we know it will continue on this planet. Members of VFP, many who have experienced directly the horrors of war, realize that the war on Mother Earth is potentially the most dangerous war of all. We are more than veterans of war, we are veterans for peace. Real peace is more than just the absence of war. Peace means justice, in this case environmental justice. Raping, polluting and destroying the environment is not justice.”

Paul Appell, a combat veteran of the Vietnam War, farmer and VFP member, added, "After working the land full time for nearly half a century, I know that one reaps what one sows. In Vietnam I learned that when one sows violence, one reaps blood. As one who has daily witnessed strip-mining here in Knox County, Illinois, for 50-plus years and farmed strip-mined ground for 35, I have experienced the war on Mother Nature. As I stand in solidarity with my fellow citizens protesting Peabody Energy Corporation’s coal removal methods, it is with intimate, firsthand knowledge that violence begets more violence."