Veterans For Peace calls on the nation to celebrate the work of Dr. Martin Luther King Jr. on Monday, January 21st by 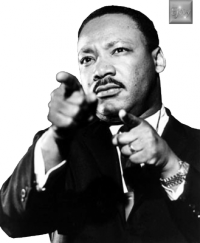 learning from his legacy and heeding his words. As peacemakers and justice seekers we believe it is not enough to honor Dr. King by applauding gains our nation has made toward fulfilling his dream. We must also acknowledge that we have fallen far short of his vision of peace and justice and take action to achieve it.

This year on Martin Luther King Jr. Day, the nation will witness an event that both symbolize great strides towards King’s dream as well as his worst fears for the country. While the inauguration of Barack Obama, the first black president for a second term, is a realization in part of King’s dream, it’s distorted into a nightmare by the United States’ wars around the globe, for which the President is responsible.

Dr. King wrote that he watched his dream run into a nightmare when he witnessed people perishing on lonely islands of poverty, while surrounded by vast prosperity. We see this today with millions of people out of work, many homeless and hungry, while corporations make record profits and wealth and income gaps soar.

He saw the dream turn to a nightmare watching the war in Vietnam escalate; ensuring that more lives were needlessly lost and resources wasted that could have been used to remedy suffering of those in need. We see this today as the nation faces huge budget deficits with calls to cut Social Security, Medicaid, Medicare and other human services all the while politicians zealously protect war funding as if sacrosanct.

Dr. King tells us that war is obsolete, explaining that the destructive power of modern weapons eliminates the possibility that war serves as a “negative good.” We witness this today in the killing of thousands of innocent people, many of them children, in bombings and drone attacks and in the twisted and broken bodies and minds of the combatants.

King had a dream of racial equality and a country free of bigotry, but he also had a dream of peace and justice. He challenged us to transform the United States into a better place and he warned us to change our values. He called on our nation to, “…abolish not only the evils of racism but the scourge of poverty of whites as well as Negroes, and the horrors of war that transcend national borders and involve all mankind.”

In Dr. King’s own words, “A nation that continues year after year to spend more money on military defense than on programs of social uplift is approaching spiritual death.”

After over a decade of war, record Pentagon spending, rising economic inequality and a deep recession throwing millions of people into poverty, this Martin Luther King Jr. holiday we call on the nation to remember that King was a champion of peace and justice who detested war in all its manifestations and died while working for economic justice for sanitation workers.