In Solidarity with Occupy Wall St. at Vietnam Veterans Memorial 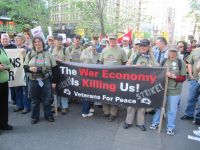 The newly formed Veterans Peace Teams went into action with Occupy Wall St. on May Day. Eight members were arrested at the Vietnam Veterans Memorial in New York City's Wall St. district, as they stood their ground in the face of a mass police invasion of the park.

The arrests culminated a day full of actions all around Manhattan. At least 20,000 people marched down Broadway from Union Square beginning about 5:30 pm. Nearly 50 members of Veterans For Peace, Vietnam Veterans Against the War and friends marched together behind a banner that read, “The War Economy Is Killing Us.”

Labor union, church leaders, students and immigrants marched to the beat of drums in a celebration of a new people's movement which is here to stay. Mass chants of “Whose streets. Our streets” bounced off highrise buildings as marchers filled the Broadway corridor on a beautiful spring evening.

At the end of the march, several thousand people gathered at the Vietnam Veterans Memorial park in lower Manhattan.. Amidst a massive police presence in the surrounding streets, police on loud speakers told people the park would close at 10 pm and those remaining in the park would be arrested.

Eight members of the Veterans Peace Teams, linking arms with religious leaders with Occupy Faith, placed themselves in the path of a line of police who were poised to clear the park. The police promptly arrested them, put them on a bus and drove them to jail. Arrested members included Ellen Barfield, Tarak Kauff, Mike Ferner, Beverly Rice, Art Brennan, Steve Chrismer, Crystal Zevon and Steve Bray.

“We have tremendous tools – our solidarity and nonviolent direct action.”

“Just being there was great,” said Ellen Barfield. “It forwarded our relationships with the Occupy folks. Organizationally, I think the Veterans Peace Team really moved forward. We learned a lot in our understanding of our mission and we made some important new friends.”

Among the religious leaders arrested was George Packard, a Vietnam veteran who is now an Episcopal bishop. During the march the Occupy Faith contingent stopped outside of Trinity Church and offered a “mic check.” “Trinity Church is very pretty. But it doesn't do anything for New York City.”

After being released from jail, Mike Ferner, former VFP national president, said “People often come up to thank veterans for our 'service.' Standing with Occupy last night was service I can really be proud of.”

The Veterans Peace Team is a new national project of Veterans For Peace. Its purpose is to stand in solidarity with people who are utilzing their inalienable right to express grieveances, to discourage police violence, to show a good example of nonviolent resistance, and to expose the inherent repressive violence of the 1% against anyone who challenges the unjust status quo.

“It was an honor to be able to stand with these people,” said Tarak Kauff. “This is a critical struggle for the life of the planet. We have tremendous tools – our solidarity and nonviolent direct action.

“I did appreciate the humanity of many of the individual police,” continued Kauff. I found many of them to be very sympathetic. They police are part of the 99%, and many of them obviously know it.”

Those arrested were charged with “Remain in NYC Park after doing without permission.” [sic] They were released after five hours in jail and given a July 11 court date.