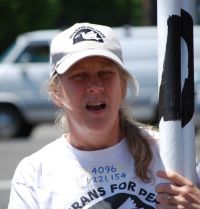 Retired Naval Commander Leah Bolger pled guilty to the charge of Unlawful Conduct -- Disruption of Congress at a hearing before Judge Stuart Nash in the Superior Court of the District of Columbia Thursday, April 12th 2012. Bolger, who is a peace activist and the President of Veterans For Peace, interrupted a public hearing of the Joint Select Committee on Deficit Reduction, commonly known as the Super Committee on October 26th, 2011 http://www.c-spanarchives.org/program/JointDef.

In her statement to the Judge, Bolger said, "I have come to understand what millions of Americans already know—that the actual majority will of the people is of little concern to those in power. We can demonstrate and petition and write letters until we are blue in the face, but those actions are virtually worthless, as we can't compete. Our voice is drowned out by the power of the money coming from the lobbyists and corporate interests. Money equals speech."

Though the maximum penalty for this infraction is 6 months in jail and/or a $750 fine, Judge Nash sentenced Bolger to 60 days incarceration and suspended that sentence. He also required her to make a $50 payment to a victims of crime fund and to perform 20 hours of community service, which Bolger will perform by working 20 hours for Veterans for Peace. She is on probation for nine months and faces the risk of having the 60-day sentence imposed, but says she is committed to continuing to speak out and protest, including when NATO comes to Chicago in May.

Judge Nash heard testimony from Retired Associate Judge Art Brennan who said, "Leah Bolger is not alone in her thinking. Millions of us would do what she is doing if we could summon the energy and the courage to tell our government what it really needs to know. Leah is charged with the misdemeanor of interfering or disrupting Congress. Far from it! She did not interfere with members of Congress doing their duty, representing the people, meeting and deliberating. Instead, she added her own careful words to a committee that needed to hear from the people that Congressional leaders are elected to represent--someone other than the military industrial complex and the corporate super-citizens."

Brennan's thoughts were echoed by attorney/activist Kevin Zeese who told Judge Nash, "In 45 seconds retired Commander Leah Bolger did more to represent the views of Americans and tell the true facts about the deficit than all of the elected representatives on the Joint Committee…(she) did an incredibly brave and patriotic act of citizenship."

Judge Nash said twice that he sympathized with Bolger's criticism of the government. She had asked the Super Committee to stop ignoring the public's demand that wars be ended, military spending be reduced, and the rich be taxed. Nash, however, said that 300,000,000 people cannot all come and interrupt a Congressional hearing. After her court appearance, Bolger said that she would have liked to be able to tell the judge that if our representatives represented us, nobody would have to interrupt them. "It is a disgrace that we have to break the law in order to speak to our government," Bolger said.

Nash's imposition of such a minimal sentence was greeted by cheering from the packed courtroom and by multiple offers to pay the $50 on Leah's behalf. Bolger does not view the $50 paid to a victims' fund as a fine. She asked the court to impose no fine, as she believed no one should pay for permission to speak to our government. "I'm gratified," Bolger said afterward, "that the judge agreed I should pay no fine." The judge also imposed no "stay-away" order barring Bolger from Capitol Hill, despite the government's request for one.

Bolger is also supported by author and radio/TV host Thom Hartmann who called Bolger's actions "a courageous act of civil disobedience" and compared her to Susan B. Anthony. Other notables supporting Bolger include Ben Cohen, Michael Moore, and prominent activist and former presidential candidate, Ralph Nader who said, "Bolger showed what active citizens should be doing peacefully--confronting the corruption head on and making sure the public knows what is really going on. She should be honored for her actions."