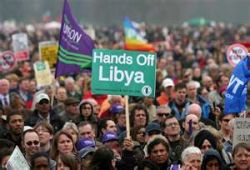 Approximately a year ago, President Obama used the Libyan uprising as an excuse to attack Libya and force a regime change. The rationale was that Qaddafi was killing innocent civilians, and the military actions were called a “humanitarian intervention.” He did not ask for, or receive approval from Congress, but his use of NATO forces to do the real dirty work helped keep those who would otherwise be opposed to U.S. military intervention appeased.

By October, hundreds of thousands of people had been displaced, tens of thousands killed and many more wounded. The U.S. spent $1 billion on this “humanitarian intervention,” which succeeded in removing Qaddafi from power (by killing him) and allowed rebel militia groups to fill the power vacuum—groups that are now committing widespread human rights abuses and labeled “out of control” by Amnesty International.

Now we are hearing similar calls to intercede in Syria where thousands have been killed under the direction of President Assad, another foreign leader the U.S. wants to see removed.

It is the position of VFP that a military “humanitarian intervention” is an oxymoron. Opposition to all war is the official position of VFP because we know that peace cannot be realized by waging war. We understand what Eisenhower meant when he described the “brutality, futility and stupidity, “ of war. VFP stands with oppressed people all over the world in their quest for freedom, democracy and human rights, and we call for diplomatic and nonviolent resistance to all of humanity who suffer under the heel of civil and human rights abuse.

Veterans For Peace was opposed to the war on Libya, and is now opposed to a war on Syria and/or Iran. Labeling war as a “humanitarian intervention” doesn’t make it right.