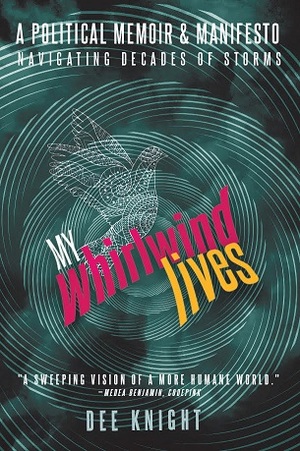 Back in the mid-60s, when I was first getting involved in the opposition to the war in Viet Nam, I had a conversation with an older activist who told me something I have never forgotten – that being an activist was not only the "right thing to do," it was a "better way to live." What he meant, I believe, is that a life of activism, a life joined with others fighting for peace and social justice, a life of questioning the conventional wisdom and seeking more nuanced answers, of discovering commonality and building community and taking action with others, was a life more fully lived. The "whirlwind" in the title of Dee Knight's book describes such a life.

His initiation into activism will sound familiar to many who came of age during the era of Viet Nam and the civil rights movement, the era of assassination – Malcolm X, Martin Luther King, Medgar Evers, Robert Kennedy - the era of tremendous political upheaval. He started out as a Goldwater teenager, but after leaving his conservative home and family in eastern Oregon and arriving at college in San Francisco, the scales fell from his eyes when he saw that "somethin's happenin' here." He became a conscientious objector and an anti-war activist, and eventually a socialist. It's a path that many young people trod in that time. And as he walked along that road he never stopped learning and growing. He became a socialist, lived several years in Canada campaigning for amnesty for war resisters, spent three years in Nicaragua supporting the Sandinistas, then back in the U.S. became, among other things, an immigration activist, a climate activist and supporter of the Green New Deal, ever involved in "the endless task of stopping the U.S. war machine and fighting for a better world."

What, to me, is most appealing, most engaging, and most heartening about his book is that it portrays a committed human being, never flagging in his determination to participate in the project of building a communitarian world, hanging on to his belief that such a world is not only possible, but essential for the survival of us all. His energy and spirit infuse this "activist memoir" and I find it inspiring that after more than 50 years, he's still going strong, is still filled with hope and even a sense of optimism – no mean feat in these grim times. "Pessimism of the intellect," Gramsci wrote, but "optimism of the will." The book speaks directly to our will for a better, fairer, more just world. Dee Knight is able to keep his eyes on the prize, focusing on what is possible rather than what, on our worst days, seems probable.

Buff Whitman-Bradley was the originator of the Courage to Resist Audio Project and an editor, along with Sarah Lazare and Cindy Whitman-Bradley, of the oral history book, About Face: Military Resisters Turn Against War.