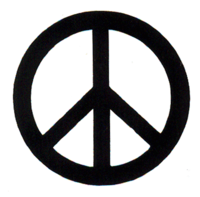 A New Hampshire high school principal was once asked why he didn't have a peace education program to balance his school's JROTC program. His answer was "because we don't have to." His school didn't have to have a JROTC program either but in our culture of war, war and violence are valued and play a prominent role as evidenced by our perpetual and failed wars of choice and normalized mass shootings that occur on almost a daily basis. The media motto is "if it bleeds, it leads" helps explain the morbid fascination Americans have with violence.

A bright beacon of hope lies in the establishment of peace education at the high school level. In an article by Alison Thurma entitled "Taking practical ideas on peace and conflict to U.S. high schools:
Students discover themselves as peacebuilders in an often violent world", Thurma described a peace education program at West Central High School in Hartford, South Dakota. The history teacher at the school, JoAnne Bohl, is a participant in the U.S. Peace Institute's Peace Teacher program, and her aim is to "have students to think about conflict in new ways, and to cultivate their own potential to contribute to positive change around the world."

She further stated that "learning conflict resolution and how to build peace are skills students can apply, whether it is to their history class or to current events. They can apply it in their personal lives, and they can certainly use it as they become citizens in the 21st Century." Bohl stated that Teenagers in American high schools know a lot about conflict: their lives are full of it with parents, friends, online feuds and rival sports teams. They often associate the concept of conflict with something negative — bullying, fights, violence, and war.

PE (public Education) works to promote the view that conflict is neutral. It becomes negative only when violence is used to resolve differences. When groups, communities and nations employ knowledge and skill to manage differences nonviolently, it is an essential, transformational force.

Students learn about their own conflict styles so that they critique them, see where they apply, and compare them to conflict styles that groups and whole countries use. The aim is to "get students thinking, talking, and processing ideas and concepts in a new way. The resources help students develop critical thinking and encourage them to take ownership of their own learning."

Students also learn that peacebuilding is a lengthy and laborious process that is not only used by heads of state but "includes everyday people learning skills like mediation, dialogue and active
listening." Students also learn about famous peacebuilders whereas in many regular history classes they learn mostly about famous battles and war heroes. In peace education classes, students watch videos and engage in dialogue about how they also might be peacebuilders. Teachers raise questions in these classes more than they lecture. "The students came to see that there are many ways to work for peace in their communities and around the world."

Schools often claim that they direct their education efforts to the whole child and to the development of good citizens but this is often a false claim because good citizens can think critically, empathize, resolve conflicts peacefully, are compassionate, communicate effectively, serve their communities, act with civility, and have a global perspective. Most schools would be hard put to identify aspects of their curriculum that directly produce these outcomes. Peace education transforms students and elevates their human development in ways that enhance their community, state, nation, and world. These students now and later into adulthood will be able to question authority and are not easily manipulated by mass media and propaganda. They think for​ themselves and care about others. We need to provide peace education in every high school in order to bring our society to a much higher level of functioning.