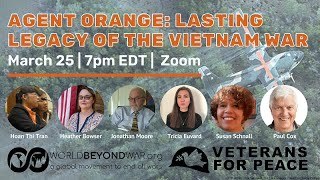 Sixty years ago, the United States used approximately 19 million gallons of 15 different herbicides, including 13 million gallons of Agent Orange, over southern Vietnam, Cambodia, and Laos. Between 2.1 and 4.8 million Vietnamese were exposed during the spraying and many more continue to be exposed through the environment. Agent Orange exposure continues to negatively affect the lives of men and women in Vietnam and in the United States. Agent Orange exposure is associated with cancers, immune deficiencies, reproductive illnesses and severe birth defects in Vietnamese, American, and Vietnamese-Americans directly exposed as well as their children and grandchildren. 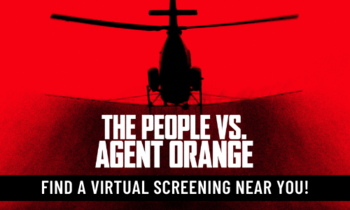 This webinar is also in conjunction with the recent release of the powerful new film The People Vs. Agent Orange.

The Agent Orange catastrophe did not end with the Vietnam War. Today, the world over, a primary chemical of the toxic defoliant controls weeds in farming, forestry, parks, playgrounds... It wreaks havoc on the human genome, causing deformities and deadly cancers.

After decades of struggle and tragic personal losses, two heroic women are leading a worldwide movement to end the plague and hold the manufacturers accountable. In France, Tran To Nga is suing the American chemical industry for poisoning her in Vietnam. In America, Carol Van Strum exposes the continuing use of toxic herbicides, many still containing dioxin. Incriminating documents disappear. Activists are threatened. A helicopter technician secretly films the contamination of reservoirs while a massive industrial cover-up continues.

Make sure to also check out the page for our Vietnam Agent Orange Relief and Responsibility Campaign, an initiative of U.S. veterans, Vietnamese Americans, and all concerned about peace and justice. We insist our government honor its moral and legal responsibility to provide assistance to all AO victims--Vietnamese, U.S. veterans and our children, and others—and to the mitigate the environmental damage in Vietnam.