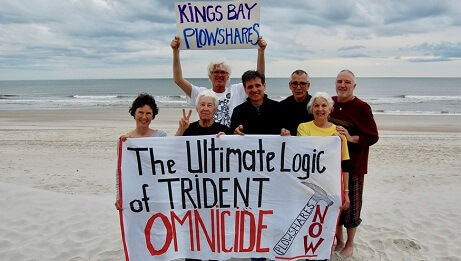 No one was allowed to wear shirts with messages into the court room of the Kings Bay 7 Trident Plowshares Trial in Brunswick, Georgia, in late October. Outside of the court house Veteran For Peace members, complete with a black and white VFP flag, joined Catholic Workers and many others educating people in the streets, of the ever present danger of nuclear weapons, and then sitting in the court room absorbing the amazing story of the Kings Bay Trident Plowshares Seven.

These seven, Liz McAllister, Steve Kelly SJ, Mark Colville, Martha Hennessy, Carmen Trotta, Patrick O'Neil and Clare Grady, are Catholics who minister to the poor and marginalized, and take their faith very seriously. Inspired by the biblical prophesy of Isaiah that "in days to come...they shall beat their swords into plowshares and spears into pruning hooks" they cut their way through metal fences and concertina wire into the Kings Bay Submarine Trident Missile base on April 4th of 2018 to expose the illegal and immoral nuclear missiles ready to be unleashed on the order of the US Commander in Chief. They posted a large banner inside the base that read: The Ultimate Logic of Trident is Omnicide.

Two of the seven wore Go-Pro cameras on their heads, knowing these would be confiscated and the videos used as evidence. The prosecution presented about a hundred pieces of evidence including the videos that showed not only the ripping apart of the missile facsimiles but included the audio of Patrick O'Neil's exhausted grunting from crow bar prying and Carmen Trotta's frequent gasps of air "phew, phew" as he struggled cutting wires into the base.

During their trial, one of the defendants, Clare Grady, objected to the fact that the government did not use either the yellow Crime Scene tape she and others strung around the missile shrine, nor the copy of Daniel Ellsberg's book The Doomsday Machine. The government prosecutor noted that yes, the caution tape was observed. Clare corrected him stating it was not a caution tape but a Crime Scene tape. Later, the federal prosecutor noted he did not like the display scene being labeled a shrine by the defendants and didn't have a copy of the book Ms Grady was referring to. Clare was able to show a Go Pro video that clearly showed the Doomsday book on a sidewalk inside of the base. She presented a substitute copy accepted by Judge Lisa Godby Wood as an exhibit for the defense.

The defendants, especially Patrick O'Neil, expressed satisfaction with Judge Wood. Although she had issued a gag order to stop international law experts from testifying, and refused to allow the use of the Religious Freedom Act or use of the necessity defense plea, she overruled most government objections to defendants speaking of their religious beliefs or explaining the symbolic meaning of their use of human blood, and their comments on the idolatry shown in the Shrine Gods of Metal display.

A jury of twelve, mostly women, found the seven defendants guilty as charged on all four counts. Judge Wood has 90 days to decide on a sentence. All were released to await sentencing except Steve Kelly, a Jesuit priest who was returned to jail in shackles. Kelly has another charge awaiting him on the west coast at the Pacific Fleet Trident base at Bangor, Washington. Fr Kelly has spent ten years in prison for previous nonviolent Plowshare actions.

To see more information on the Kings Bay 7, you can check out their website!