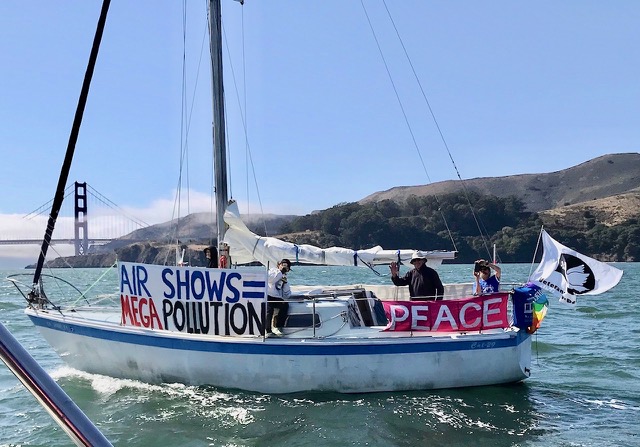 GROUND THE “BLUE DEVILS” For PEACE and CLIMATE JUSTICE!

Do the Blue Angels depress the hell out of you? Does what’s in the air cause you despair? 300,000 lbs. of CO2* are released into the air during each air show, and that doesn’t count training & practice time!

On Sunday, October 13th, it was a lucky day for peace lovers on our 2nd Annual PEACE FLOTILLA, sponsored by S.F.. CODEPINK and S.F. Veterans For Peace. Have you longed for a way to express your grief over the presence of the Blue Angels over our bay? Well, next year you can join us in the 3rd Annual Peace Flotilla. Our huge banners decorating our two boats, the “Hokahey” and “Lil’ Wing,” read: “REAL ANGELS DON’T DROP BOMBS,” “STOP KILLING FOR EMPIRE,” U.S. MILITARY #1 POLLUTER,” “BOMBERS RUST IN PEACE, “AIR SHOW = MEGA POLLUTION,” and “NO GLORY IN WAR.” 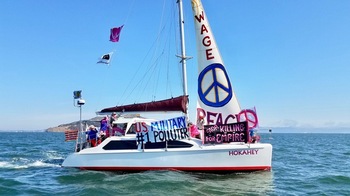 The CODEPINK and Veterans For Peace flags were hoisted up high on one of cables of the “Hokahey” catamaran, and a giant brightly colored peace sign on it’s jib sail was surrounded by “WAGE PEACE.” Crew on the “Lil’ Wing” were interviewed by NBC and KCBS, before departing the Sausalito harbor. (Also, KPFA evening news interview the night before sailing). We sailed and motored from Richmond and Sausalito to converge just east of the Golden Gate Bridge. The bay was filled with hundreds of boats of all kinds and sizes. But ours vividly displayed our desire for peace to the crowds of thousands on the San Francisco shore and in the boats, who gathered to watch this troubling, air polluting and frightening military display. Ultimately “Lil’ Wing” had engine trouble and had to be towed to dock, but the “Hokahay” held strong as we sailed up and down the S.F. shoreline for a couple of hours, reminding folks of the true cost of war, and Air Shows. 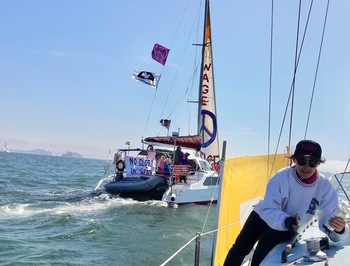 How many people in the crowds that day gave any thought to the trauma that the Blue Angels Air Show stirs up in war veterans, war refugees and other individuals who have experienced war in all it’s terror, and are still suffering from PTSD and/or moral injury even decades later?

And then there was our fantastic land crew, led by Fred Bialy, who were courageous enough to scatter themselves amongst the less than warm and fuzzy crowds, distributing flyers to those who would accept, to help unveil the dark side of the “Blue Devils,” Fleet Week and the U.S. military industrial complex. (Leaflet attached below) Huge thanks to Fred, Paul, Judith, Francis, Sherri, Renay and her visiting friend, and our dear South Bay Codepink sisters Diana, Charlotte and Deb, who unexpectedly joined the effort! Fred prepared an excellent leaflet (Page 1, Page 2) and www.BeforeEnlisting provided us with some great counter-recruitment leaflets for the youth. 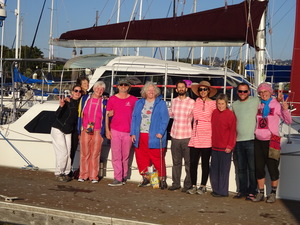 As the catamaran returned to the Richmond dock at the end of the day it was very disheartening for us to look back and see the extra thick layer of pollution that hung over the S.F. skyline, reminding of us of the huge contribution that the U.S. military and Fleet week contributes to the ever more serious climate crisis that we all face. A day later, the air was still filled with the thick pollution dumped on our bay from the air show. Hopefully many of the onlookers that day “digested” our banners’ messages addressing the “mega pollution” effects of U.S. Air Shows & militarism.

We all share Greta Thunberg’s deep rage for a large part of our society that continues to live in climate denial and especially for the people of power that could make a difference and that refuse to act responsibly about the global climate chaos. Shockingly, the U.S. military continues to get obscene gross exemptions regarding fuel emissions both nationally and globally. Fred reported that many of San Francisco’s supervisors were participating in the Fleet Week parade, in all of its false “glory.” Much work is needed, including a strong need to revive the campaign to SHUT DOWN FLEET WEEK from our bay! Time is running out. What will we tell our grandchildren and great grandchildren?

Good Reading: The Problem with the Blue Angels 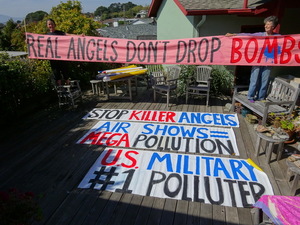 Appreciation:
Big thanks to EVERYONE who contributed in large and small ways to make the day so successful!

Special thanks go to:

Apologies to the Santa Rosa contingent who were unable to participate due a 3rd boater cancelling at the last minute. We hope you’ll join us next year!

LASTLY, We Want You... (all of you readers) to join us in starting to work on our third annual Peace Flotilla for next year’s Fleet Week soon. Will you help us? We want the Peace Flotilla to grow every year….but we need help to find boaters!