Most of the literature we distributed is available at the National VFP website under Save Our VA. www.veteransforpeace.org

Title: How Can Veterans Unite Our Campaign to Stop Privatization of VA Healthcare With Progressives Fighting for Universal Health Care for All Americans in 2020

Not able to summarize what each speaker said but will include a short part of the Moderator's comments:

Our fight to Save VA Healthcare has JUST BEGUN. As the 2020 elections come closer the fight for universal healthcare is being debated by millions of Americans.

The VA's success in delivering healthcare to veterans demonstrates that public institutions –
RUN BY OUR GOVERNMENT LIKE THE VA – can indeed deliver UNIVERSAL HEALTHCARE TO ALL AMERICANS.

NINE MILLION OF US VETERANS have the right to FULLY guaranteed, quality healthcare benefits. NOW WE CAN JOIN OUR FIGHT to Save Our VA Healthcare from privatization with the battle that millions of our brothers and sisters are waging for all Americans to have quality heathcare as a RIGHT just like us veterans.

WE VETERANS can say the fight for universal healthcare for all Americans is MORALLY RIGHT and brings us closer to establishing the principle that access to guaranteed, quality healthcare is a RIGHT FOR ALL AMERICANS!

At dinnertime we had a SOVA meeting with about 15 activists present. We discussed various ideas about how SOVA activists might take our battle into the election campaign much like Boston VFP member Pat Scanton did at a Cory Booker event in New Hampshire on August 17.

I attended a backyard meet and greet with Corey Booker in NH on Saturday. I took a copy of Suzanne Gordan's book "Wounds of War" with me and wore our Save Our VA T-shirt. There were about 180 people there. After speaking for about 1/2 hour he opened it up for questions. I luckily was called on first. I was able to give Corey a copy of Suzanne's book. He asked me to explain the Mission Act and handed me the mic (that could have been a big mistake). I briefly explained what the Mission Act was and why it was detrimental to veterans. If I had known that he was going to do that I would have been better prepared. At the end of the exchange he publicly stated that when he is president he will stop the privatization of the VA. We need to get all the candidates to make similar statements. We are trying to get to as many of the top tier candidates as possible.

Attached is a U-tube copy of that interaction. This was taken by a local TV station. Corey's pledge to stop privatization is not on this piece, it was edited just prior to his comment. I am waiting for another version that may contain that commitment.

Two SOVA activists, Skip Delano and John Spitzberg, announced they are candidates in the election for the VFP Board of Directors. 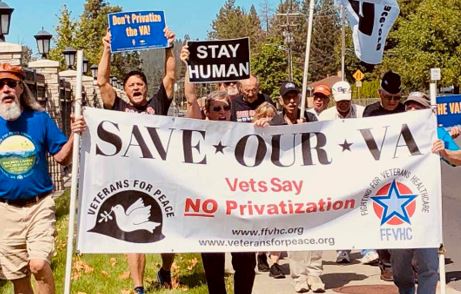 WHOSE VA? OUR VA!
&
THEY SAY PRIVATIZE, WE SAY FIGHT BACK!