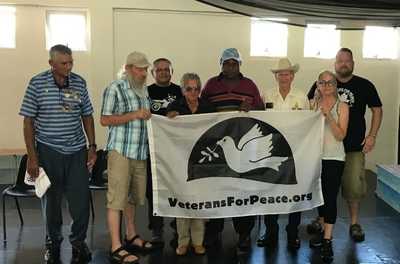 In June & July, Chapter 180 president Joshua Shurley travelled to Cuba on an unlicensed delegation comprised of educators and healthcare providers to protest the ban on Americans travelling to Cuba, as well to protest the six decades-old illegal and immoral US blockade against Cuba.
In addition to seeing firsthand the Cuban education and healthcare systems at work, the caravanistas observed the democratic processes going into their new constitutional referendum process.

On June 28, the delegation met with a contingent of Cuban veterans (the combatantes) of the US-backed Bay of Pigs invasion as well as veterans of the Cuban mission against Apartheid in Africa during the 1970s. Joshua, along with two other fellow US veterans (Christine Traxler and Bill Hill) spoke in a forum about the true costs of war and militarism, and stood for a group photo in a gesture of peace, friendship and solidarity.

At the end, one of the combatantes presented Josh with a commemorative pin, while Josh presented him with a VFP button. This emotional moment was meaningful to all present who recognized the folly of war, and the obvious fact that we are all family in paz, amistad y solidaridad, para siempre.
https://vfp180.org/2019/07/19/a-white-rose-reflections-on-the-2019-cuba-caravan/