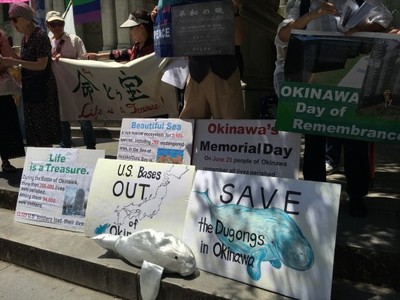 This may be big news.

The 2020 Defense Authorization Bill, presented to the Senate on 11 June, contains a section, (Section 1255) requiring the Department of Defense to do a review of the plan to move the 1st Marine Air Wing from Futenma Base in Okinawa to Henoko (still in Okinawa) where they want to build a new super base to house it.  The Okinawan people’s movement against this plan has gone on for decades. In local election after local election, anti-base candidates have been chosen; legal actions are ongoing, the Governor has refused permits, the sit in at the construction gate has passed its 1700th day, fatal engineering flaws have been revealed, but the Japanese Government, apparently in a state of denial, keeps bulling on ahead.  For some years now VFP has made this one of its issues, taking it up at its conventions, sending delegations to Okinawa, and lobbying the US Congress.

Up to now the US position has been, this is a Japan problem; please take your questions to Tokyo.  Section 1255 is a radical departure from that policy.  By requiring a DOD investigation they are saying that they are no longer willing to leave everything up to the Japanese Government and expect it all to come out OK.

Most Okinawans are sure that this project will not withstand an objective investigation; that to pull the lid from it will be to put an end to it.

Has Okinawa’s voice, at least to a significant degree, been listened to?

But there is a problem.  The provisions for an investigation are in the Senate version of the bill.  The House version contains no such language.  At some point the House and Senate Armed Services Committees will have to come up with a unified text.  This is where we need to do some more lobbying. Please contact your congressional representatives – especially if they are on either of the armed services committees – and ask them to make sure that this call for a review of the Henoko Boondoggle becomes the unified voice of the Congress.

. . . [T]he Secretary of Defense, in consultation with the Government of Japan and other foreign governments as necessary, shall conduct a review of the planned distribution of members of the United States Armed  Forces in Okinawa, Guam, Hawaii, Australia and elsewhere that is contemplated in support of the joint statement of the United States-Japan Security Consultive Committee issued April 26, 2012, in the District of Columbia (April 27, 2012 in Tokyo, Japan) and revised on October 2, 2013, in Tokyo, hereafter referred to as the “distributed lay down”.