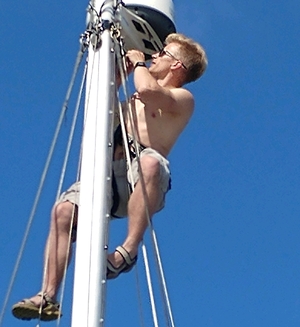 The Golden Rule's new captain!
The sea trial went as planned and the Golden Rule will be arriving back to port.
They sailed in conditions similar to what they'll encounter on the way to Hawaii, tried out various sail plans, and have a short list of things to do while in San Diego. We look forward to hearing more this evening and planning for next week's departure for Hawai'i!
They had special visitors over the weekend, Jessica Reynolds Renshaw and her husband Jerry Renshaw.  Jessica and her family sailed the Phoenix of Hiroshima into Honolulu onto the same dock as the Golden Rule in 1958.  The Reynolds family took the baton and finished the voyage to the Marshall Islands while the crew of the Golden Rule were detained and unable to proceed.  They represented both boats in 1958 in the attempt to stop nuclear bomb tests.
Both boats sank in 2010, and although Veterans For Peace and Quakers and other old wooden boat lovers managed to restore the Golden Rule, the Phoenix of Hiroshima remains at the bottom of the Mokolumne River (Sacramento River Delta).  The Reynolds family and the Phoenix's Board of Directors spent years trying to get the boat raised so she could be restored, but she is too far gone.  With sadness, they had to give up on the dream of the two boats sailing together to the Marshall Islands and Japan next year.
The Phoenix Board of Directors donated $11,000 to help the Golden Rule and now Jessica is bringing a nicely mounted piece of the Phoenix for the Golden Rule to carry.   This time, the Golden Rule will represent both boats in an effort to bring about global nuclear disarmament and end the possibility of nuclear war.
The Phoenix passes the baton back to the Golden Rule at Cabrillo Isle Marina
The Phoenix wrote a nice letter to the Golden Rule and Golden Rule answered!  See it here and here!
Category: Uncategorized
Tags: Golden Rule, New Mexico, Nuclear Weapons