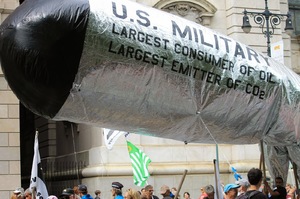 Can climate change be the issue that brings focus to Veterans For Peace and the activist community it is part of?

I recently finished reading "the Uninhabitable Earth" by David Wallace-Wells. He has put together the most authoritative and replete array of research to explore all the known manifestations of climate change and the range of human responses. If there was one imperative derived from this incredible work it is that climate change is upon us with a vengeance and there must be a massive, totally-committed response by all human beings and their representative governments to preserve the habitability of the planet.

One very salient point that resonated with me was the inevitable increase in military activity, wars and conflicts, as the global temperatures increase over the next very few years (say two to three decades). Mr. Wells, at one point, made the observation that if we were to mobilize against climate change in the same dedication of spirit that we mobilized to meet the armament needs of the second world war, we could effectively mitigate the inevitable.

So, why not demand that the military sacrifice its bloated budgets, world-wide, and apply those funds toward the development and distribution of technologies already in existence, along with consumer-sacrifices (again like WWII), to this problem panting on our doorstep?

THE NATURE OF VFP

Veterans For Peace has always been a big umbrella organization; that is, it engages a wide range of issues depending upon the varying interests of our members. That diversity has been a source of strength, but also a cause for frustration for those who want to see a unifying issue that we all can get behind.

There have been attempts in the past to elevate one issue above all others. The closest we came was on the eve of the war in Iraq. That drew great numbers from almost all chapters to D.C. to march and protest. Since then there has been no such unifier. Yet, members continue to strive to bring peace and justice into the world with great expenditures of treasure and energy in a host of different endeavors. They are reflective of the many existing injustices and the personal responses of our individual members. VFP members have become acknowledged experts in many fields of anti-war activity, which is our most valuable resource as an organization. 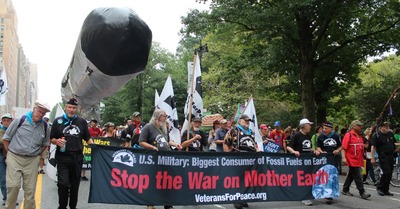 So, how does that prepare us to encounter the massive and immediate challenge of climate change?

Indeed, what does exposing and protesting the underlying causes of the U.S. refusal to recognize Venezuela's government, choking it off with sanctions and lies, have to do with climate change?

Does the imminence of nuclear holocaust have anything to do with climate change?

The current refugee crises can only be exacerbated by climate change – doesn't this provide additional fodder for nationalist, fascistic demagogues already growing in number and influence?

Does the U.S. support of Israel in its repression of Palestinians have an effect on the climate?

Black Lives Matter; does that issue bump up against climate change?

When you consider the motives underlying those issues, and more, the answer is "yes, they do."

Oil exploitation accounts for much of our Middle-Eastern and Venezuelan wars and interferences, for instance. Reliance on petroleum and coal accounts for a large share of the greenhouse gas over-load driving the warming of the planet. ( Just one example of cause and effect; there are many more that need addressing, of course.)

Nuclear warfare will soon become a minor side-issue as more of the world begins to realize what is already upon them and how it threatens annihilation on a scale much greater than the release of nuclear weapons.

Inner city decay and the oppressions of poverty, aside from fomenting frustrations leading to violence, also absorb resources that could lift those communities if applied to a number of creative responses to climate change; for instance, vegetable gardens on vacant lots, replacement of substandard housing with energy-independent structures and the technical training and employment opportunities that attend.

I believe peace and justice issues of all kinds would benefit immeasurably from re-allocation of funds to the employment of known technology to reduce emissions and the necessary re-education of people away from out-of-control consumption and waste generation.

When you consider the unconscionable amounts ($1.3 trillion in 2019 in just the U.S.) spent on armaments and training people from those neighborhoods in the science of killing, doesn't it make sense to divert those immense sums to the saving of the planet and the useful development of all lives, including black ones? I submit that the increase in economic stability this would bring about would certainly help free people from segregated living.

The recent increase in nationalism and its hand-maidens, autocracy and fascism, is a phenomenon that feeds on perceived disasters and will be difficult to overcome. We need to meet it head on by supporting efforts to educate the public as to exactly what interests those over-blown characters actually serve. We need to emphasize democratic principles and insist on transparency and truthfulness from those purporting to lead us – and if we don't get it, give them dishonorable discharges. We need to support people who will serve the interests of the people, which means making sure they will work with us to keep earth habitable.

If I have evaluated the facts properly, as so well represented in David Wallace-Wells' book "The Uninhabitable Earth", it will take effort and personal sacrifice on the scale of what so many nations, on all sides, did in WWII. What we accomplished then was a re-ordering of political power at tremendous cost. What we could do now is a reordering of all national priorities away from self-interested intrigues and conflicts toward a consciously unified effort to keep our planet habitable.

We can keep flogging our favorite issues, but we need to relate those issues to the preservation of earth, as suggested above.
We need also to increase the volume of our voice by joining it with others similarly motivated. I think of those children who are challenging the system by leaving classrooms "because why should we go to school when we are all going to die?". They need help organizing their very effective message. We have gone into public schools to wrestle with recruiters, so this would not be stretch for us.

I think a healthy discussion would reveal many more ways to direct the compassionate energies and resources of Veterans For Peace.
Let's have it.