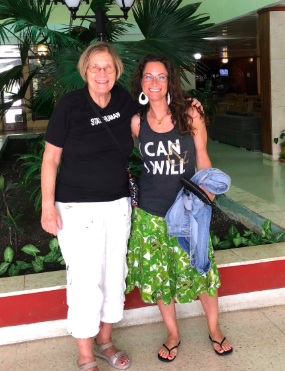 Former board member Monisha Rios and current advisory board member Ann Wright were speakers at the 6th International Symposium on Abolition of Foreign Military Bases held in Guantanamo, Cuba May 4-6, 2018.  Monisha was there to research and organize for MIRA, an international Peoples’ coalition she’s building to address the impacts of U.S. psychological warfare among other things.

VI International Seminar on Peace and the Abolition of the Foreign Military Bases was held in Guantánamo, Cuba, from May 4 to 6, 2019.  It was called for by the World Council for Peace, the Cuban Movement for Peace and the Sovereignty of Peoples (MOVPAZ) and the Cuban Institute of Friendship with Peoples (ICAP), with the co-sponsorship of the Organization of Solidarity with the Peoples of Africa, Asia and Latin America (OSPAAAL), the Martin Luther King Jr. Center (CMLK) and the Oscar Arnulfo Romero Reflection Group.

This seminar will once again bring together fighters for peace and against-war solidarity friends of Cuba and friends of the most just causes of the peoples, in order to demand the elimination of foreign bases and facilities from the countries of our region and from the whole world, as well as the cessation of the militaristic and arms race that US imperialism develops along with its NATO and Israel allies and that sets the world in the forefront of a new world conflagration.

Likewise, it will be held at a time when a great offensive of imperialism and the Latin American oligarchies are going against the democratic and progressive processes of the continent. This imperialistic offensive attempts to reverse by all means, the achievements of progressive governments in defense of their peoples and their genuine independence and sovereignty through political and media tricks and infamies, as well as through the implementation of mechanisms of economic extortion and through the tendency to deal with political issues through the courts. 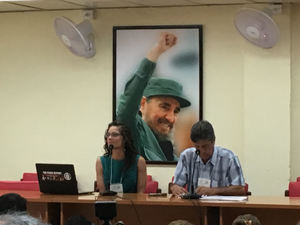 Ann spoke on US/NATO bases in Eastern Europe and Scandinavia and on US Bases in Africa and Monisha spoke on holding the American Psychological Association accountable for some of its military members using psychological methods to torture prisoners in Guantanamo and other military prisons.

Greetings Compañeras y Compañeros,
My name is Monisha Rios. I am a descendant of stolen, enslaved nations in the Puerto Rican diaspora and a former soldier in the United States army. I did not understand what I had done, that I had signed up to be used as a human weapon by an imperialist government hell bent on global domination at any cost. I did not know the history of my People or the cruelty with which the ruling class of the United States exploits and endangers us all. Similarly, I did not know that by choosing psychology as my profession, I would be serving that same master.

I have learned how U.S. military psychologists have been doing so much more than torturing prisoners in the illegal base here on these sovereign lands. In 1917, as the U.S. government prepared to enter World War I, the American Psychological Association encouraged its members to enter the military and apply their relatively young brand of science to the solving of military problems. What began as the testing of recruits has evolved over 102 years into a massive and prominent institution in the military industrial complex. From human engineering to weaponization of artificial intelligence, military psychologists have their hands in nearly every aspect of U.S. imperial warfare. Historical documents by proponents of military psychology, and military psychologists themselves chronicle the mutually beneficial nature of this relationship. I brought examples for you to see. The U.S. empire gets an exponentially more lethal military force and the psychological industry makes millions in profit. More lands are stolen, more waters are poisoned, more Peoples are subjugated, more bases are built, and more children are killed as a result. I have committed my life to eradicating this menace. But I can't do it alone.

Even though there is now a small group of psychologists in the U.S. who recognize that the militarization of psychology must be stopped, the majority of psychologists will not listen. I believe international pressure is required in order for them to wake up. Sisters and brothers, as we come together here in our shared struggle against colonialism, imperialism, and the destruction of Mother Earth through base expansion and war, I ask for your help and consideration as to how we might work together to bring accountability to the American Psychological Association and dismantle the military psychology industry, a pillar of empire.

With solidary love and respect, I thank you.