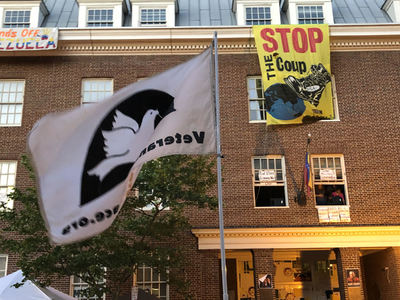 by Gerry Condon and Kevin Zeese

For 37 days, peace activists lived in the Venezuelan Embassy in Washington, DC, at the invitation of the democratically elected and sitting government of Venezuela (also recognized by the United Nations). Members of Code Pink, Popular Resistance, ANSWER and Veterans For Peace maintained a presence in the Embassy, in order to keep it from being taken over by right wing Venezuelan coup-plotters, backed by the U.S. government. Ultimately, the Embassy came under siege by violent right wing thugs, backed by various police agencies, including the Secret Service. Peace activists attempting to deliver food to the Embassy’s occupants were routinely attacked.  The police looked on passively, but were quick to arrest nonviolent peace activists.

Ultimately, the police actually joined in the attacks, as I learned firsthand.  When I attempted to throw a cucumber to the waiting hands of the Embassy Protectors in the second floor window, I was tackled by five or six Secret Service police, thrown face first into the pavement, causing injuries to my face and legs. I was then arrested and put through further abuse amounting to torture (hands cuffed very tightly behind my back while left in a stress position in the back of three different Secret Service police cars for extended periods of time, followed by a very uncomfortable night and day in jail).

Now it is I who am charged with assault, even though I never laid a finger on anyone.  This puts me in the company of many people who are treated similarly in U.S. cities every day. It is almost the rule that militarized police assault people – mainly people of color - and then charge them with assault.  Hence VFP’s call for “Peace at Home, Peace Abroad.”

VFP members traveled from around the U.S. to participate in the support vigil outside the Embassy.  Ken Ashe of VFP Asheville, North Carolina was one of the Protectors inside the Embassy.  VFP members helped organize a successful 3 am delivery of groceries, despite violent opposition.  VFP members who were unable to go to Washington contributed nearly $5,000 toward travel assistance for those who could make the trip.

Eventually authorities cut off electricity and water to the Embassy.  Then Jesse Jackson arrived and managed to deliver four bags of groceries to the Embassy, with help from Ajamu Baraka and members of Black Alliance for Peace.  Jackson promised to return with more supporters.  At that point, U.S. authorities apparently decided it was time to evict and arrest the remaining four Embassy Protectors.  As many as 100 police, including paramilitary and K-9 units took two hours to do so.  The four peace activists spent the night in jail and are facing serious federal charges, ironically “Interfering with Embassy Protection” (words to that effect).  They are facing a year in prison.  About 10 days later, U.S. authorities ushered the Venezuelan coup plotters into the Embassy.

As unusual and bizarre as this whole struggle has been, it turns out it was not unique.  Below, Embassy Protector Kevin Zeese of Popular Resistance introduces a just released 9-minute video that shows a spate of attacks on Venezuelan Embassies in several countries.  This puts the Embassy Protection struggle in perspective:

This brief video puts forward a well-researched and explained perspective on the siege at the DC Venezuela embassy that I was unaware of. The takeover of the DC Embassy was part of a strategy being used in multiple countries by the coup plotters (which includes the US in the lead) of trying to take over Venezuelan embassies. Our Embassy Protection Collective is included at the end of the video. As we have been in the embassy forover a month, we were unaware of many of these embassy attacks that happened, some of which while we were in the DC embassy.

The Venezuelan coup has failed in Venezuela where the opposition cannot win elections or execute a coup. People are not joining their attempted takeover and even those who supported the fictional president Juan Guaido (inside and out of the country) are losing confidence in him. The US and coup plotters need takeovers of embassies to keep the coup attempt alive.
The takeover of the US embassy by a fictional ambassador of this failed coup was essential to their attempt to resuscitate the failed coup. We continue to push for a solution under international law that has been used since the time of Genghis Khan and is now included in the Vienna Convention, mutual Protecting Power Agreements.

Take Action: Tell the State Department to Protect the Embassies.