Great news on the legal front! Renowned Irish human rights lawyer Michael Finucane has agreed to take Ken and Tarak's case. Michael is no stranger to seeking truth, as his father was murdered by British loyalists in 1989, and he has been working to expose the facts of this case for decades. Tarak, Ken, and Ed Horgan met with him on April 30, and were quite impressed, and Michael is eager to be involved in the case.

Their next court date is in Ennis May 8, when they are planning to request a change of jurisdiction from the District Court in Ennis to the Circuit Court in Dublin. This is important for two reasons. First, it will guarantee that they will have a jury trial, and second, they have a much better chance of getting a fair hearing in Dublin, since Shannon Airport is an important economic driver in County Clare, and the U.S. refueling stops are quite profitable.

After this court date, when we hope the prosecution will finally have prepared their "book of evidence," for the case, Michael plans to move forward with an appeal of the bail conditions, which must be heard by the High Court in Dublin, which set the conditions to begin with. Hopefully, this will result in Tarak and Ken's passports being restored to them, at which point they will finally be able to come home to the U.S. 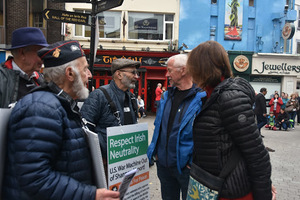 Meanwhile, they are continuing to use their time to draw attention to the situation of illegal U.S. military flights through Shannon Airport. They have carried out several banner drops in Limerick, Dublin, and on the roadway leading to Shannon Airport (although they are not allowed to go near any Irish airport under their bail conditions). They have also been holding banners and wearing sandwich boards in front of the Irish Parliament and elsewhere, where they have engaged with passersby and distributed a brochure explaining the issue.

Finally, be sure to watch this excellent video (and posted above) about their case with Ken, Tarak, Ed Horgan, and Irish MP Clare Daly, all speaking eloquently about why it's wrong to allow U.S. troops to pass through neutral Ireland on their way to illegal wars in the Middle East: