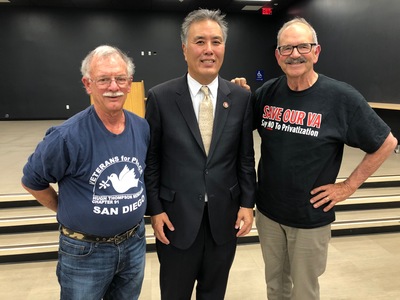 San Diego VFP President Ed Fox and Jim Brown attended Rep Takano’s  meeting Thursday April 25.
Jim and Ed had the chance to talk to Rep. Takano and sent in this report:
"I introduced myself, thanked the congressman for his efforts to prevent privatization and asked what efforts are in play to counter privatization?  He first thanked me for my service and and said “I like your t-shirt.”
He was very eloquent in describing the issue(s) and said his committee is very active dealing with the VA Secretary on several fronts.  He expects a major battle to take place over in house VA funds being used to pay for private healthcare over which they have have no control or oversight over.
Ed asked for his thoughts on the bill about Eliminating  the Authorization for Use of Military Force.  Rep Takano was on board with that,  but says there are other bills and amendments to consider before a final bill is voted on.
We thought he was well informed on the issues and well spoken in his discussion and with the answers he gave to his audience of about 100 people.
He concluded his meeting with the thought that he appreciated the many well thought out comments and questions presented tonight.  He wanted us all to continue to speak out on the issues and be as active as possible for them because “your elected officials cannot effect change without us.”
Category: Uncategorized
Tags: San Diego, Mark Takano, SOVA, Save Our VA, Legislative Visit, Town Hall