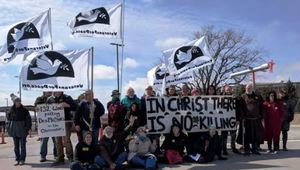 Veterans for Peace and Catholic Workers from across the Midwest converge on the Iowa Air National Guard Drone Command Center in Des Moines, Sunday, March 17 at 1 p.m.

The Midwest Catholic Workers – a loose collection of dozens of autonomous communities spread out in urban shelters, soup kitchens, and rural farmsteads across the region, were holding their annual "Faith and Resistance Retreat" March 15-17 in Des Moines. This year's focus, the two year DMCW & VFP "Close the DM Drone Command Center" Campaign

Five years ago in 2014 on St Patrick's Day the Midwest CW Faith and Resistance Retreat was hosted by the DM CWers and VFP and it ended with a protest at the announced site of a yet to be build IA National Guard Armed Drone Command Center.

The Rally ended with a nonviolent direct-action witness with protesters walking onto the base, lead by the eight Catholic Workers and Vets for Peace, risking arrest in an attempt to shut down the site. They got arrested blocking the main entrance gate with their message from St Patrick himself "In Christ there is no killing" Shut Down the DM Drone Command Center!

All eight were taken to Polk Co. Jail. Al Burney bailed out. The other seven stayed in jail overnight, plead guilty before a Jail Judge Monday morning and fined between $100 and $1,000 and set free.