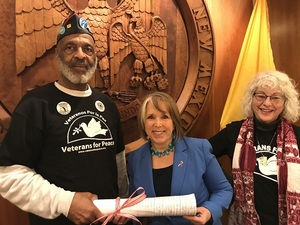 On Monday March 11, Veterans For Peace, Albuquerque Chapter 63 members Sally-Alice Thompson, Chaia Ross, Ravi Wadhwani and past Chapter President Charles Powell ventured to the state capitol in Santa Fe to participate in the Annual Veterans Appreciation Day activities and deliver petitions to Governor Michelle Lujan Grisham asking her to issue pardons to deported veterans so they may legally return home.

Veterans, representing VFW, American Legion, Disabled Veterans of America, VFP and other organizations were escorted into the Cabinet Room of the Governor's Suite. After Governor Lujan Grisham greeted, briefed and praised those in attendance, Powell addressed the Governor. He thanked her for supporting legislation, while in Congress, that would correct the exiled veteran problem and for visiting deported veterans in Tijuana. He asked her to grant pardons to veterans who were deported based on New Mexico convictions. He presented her with petitions showing public support for pardons.