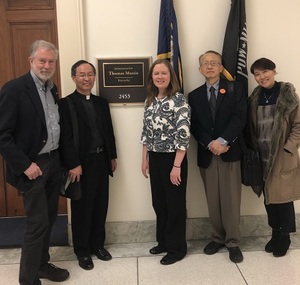 About 70 participants from nationwide participated in the Korea Peace Advocacy Days in D.C., 3/13-14, 2019. They made more than 60 Congressional visits—both House and Senate—starting in the afternoon of March 13. Four members of VFP (Ellen Barfield, John Kim, Robert Prokop, and Ann Wright) joined in the advocacy teams.

Noteworthy meetings in the Capitol were with assistants of Senator Sanders, Warrant, Gillibrand, and Booker. In addition, Ann Wright had a personal meeting with Rep. Tulsi Gabbard, and other participants also had some personal meetings with Rep. Meeks (D-NY), Rep. Massie (R-KY), etc. Many participants urged further dialogue with North Korea and Congressional support to an official ending to the costly Korean War.

Rep. Ro Khanna (D-CA), an Indian American and First Vice Chair of the Congressional Progressive Caucus, also spoke to the participants at the opening meeting. He emphasized that we have no choice but to continue our talks with North Korea and build mutual confidences first in order to promote both goals of permanent peace and denuclearization on the Korean Peninsula.

In a panel discussion, Jody Williams also shared the same sentiment and urged a resumption of U.S. humanitarian aid to DPRK (North Korea) as part of confidence-building measures. Doug Bandow of Cato Institute noted that North Korea did not pose a threat to the U.S. and urged American people to demand peace in Korea to our government officials. In particular, he criticized the U.S. travel ban against American citizens from visiting North Korea as short-sighted and counter-productive move. Other speakers supported step-by-step agreements with DPRK, while respecting the inter-Korean peace and cooperation process.

This advocacy days were sponsored by the Korea Peace Network (KPN), a coalition of some 100 civil society groups in the U.S, including peace, faith-based, veteran, and Korean-American groups. VFP-Korea Peace Campaign is active in the KPN.