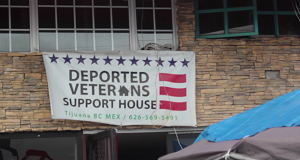 Recently VFP member Hector Barajas was interviewed for a short oral history.  Hector Barajas who served with the 82nd airborne and was deported in 2004 is the founder of The Deported Veterans Support House. The house operates as a shelter and resource center for veterans who need assistance, as well as office for our political advocacy efforts in the realm of immigration reform. DVSH also raises awareness about the deported veteran cause through social media, public outreach, and community events.

The U.S. has likely deported thousands of our veterans since the 1990s. They've been separated from their families, denied health care and benefits they are owed, and relocated to other countries without having their service matter. Many deportations of foreign-born veterans happen over minor infractions – incidents that don’t result in any jail time and that are related to common struggles veterans experience readjusting to civilian life. There are other ways our country can provide support in resolving these issues.

Deportation is a poor way to repay people who risked their lives to defend this nation.

Most of these veterans have no legal recourse to return to the United States after deportation. That’s why in July, Congressman Raúl Grijalva introduced legislation to naturalize for noncitizen veterans. The Veterans Visa and Protection Act (H.R. 5695) would protect U.S. veterans from being unjustly deported, ensure means to naturalization for noncitizen veterans, and provide deported veterans a way home by restoring their green cards and ensuring full access to their medical benefits.

Urge your representative to pass the Veterans Visa and Protection Act and #BringThemHome.

To support his and other veterans' struggles to get back home, please sign the petition!