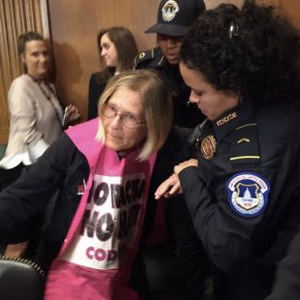 On Jan. 31st, Veteran For Peace member Ret. Col. Ann Wright was roughly arrested for speaking out against the nomination of Jeff Sessions and telling Senate NOT to confirm him at the Senate Judiciary Committee. The four-term Senator has come under fire for his record on voting rights, race, immigration and police reform.

"I am a retired U.S. Army Colonel and a former U.S. diplomat. I say No Hate, No Racism, No Ban on Muslims and NO Jeff Sessions." - Ret. Col Ann Wright, lifetime member of Veterans For Peace

Read the Op-ed she wrote about the experience!