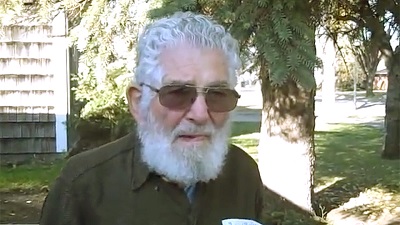 Lewis Lubka, Veteran For Peace member of Chapter 154 in South Dakota.  He passed away January 6, 2017. Lewis was born in 1926 in New York City, NY.  He was 90 years old. He served his country in World War II. He was a retired North Dakota State University professor. Lewis spent much of his life dedicated to working for justice, activities that ranged from confronting racism, ending nuclear weapons and ending war.

Lewis was a member of Red River Veterans for Peace, Chapter 154.  Lew  served with the 82nd Airborne Division in Italy during the Second World War.  Thanks to the GI Bill, he became a college professor and influenced many as he lived a life dedicated to peace, equality, and social justice.  For decades he hosted a one hour Peace Talk radio show in Fargo, North Dakota.

Lewis  was a person who had to see what was going on around the world.  He visited 90 different countries over his career.  His motivation for these visits was to experience the culture not the tourist sites.  The last visit was to North Korea.

My most memorable memories about Lew are when someone would call him a communist.  He would break out a big smile and start a debate that was always peaceful and very educational.  We will miss his vast input to our endeavors.

Lewis Lubka, 90: North Dakota peace activist and communist-People's World Tribute that contains a lot of historical notes of Lew's life including the risks he took towards ending racism.