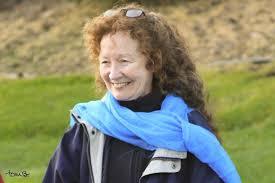 The US Peace Memorial Foundation has awarded its 2015 Peace Prize to The Honorable Kathy F. Kelly for inspiring nonviolence and risking her own life and freedom for peace and the victims of war.  Michael Knox, Chair of the Foundation, presented the award on August 9 during an event to commemorate the 70th anniversary of the U.S. bombing of Nagasaki, at the site where the first atom bombs were built.

In his remarks, Knox thanked Kelly for her service, great courage, and for all that she has sacrificed.  "Kathy Kelly is a consistent and clear voice for peace and nonviolence.  She is a national treasure and an inspiration to the world.”

In addition to receiving the 2015 Peace Prize, our highest honor, Kathy Kelly has also been designated as a Founding Member of the US Peace Memorial Foundation.  She joins previous Peace Prize recipients: CODEPINK Women for Peace, Chelsea Manning, Medea Benjamin, Noam Chomsky, Dennis Kucinich, and Cindy Sheehan.  Nominees considered this year include Jodie Evans, Dr. Glenn D. Paige, Coleen Rowley, World Beyond War, and Ann Wright.  You can read about the antiwar/peace activities of all recipients and nominees in our publication, the US Peace Registry.

Please help us continue this important work.  Become a Founding Member and have your name permanently associated with peace.  Founding Members are listed on our website, in our publication the US Peace Registry, and eventually at the National Monument.