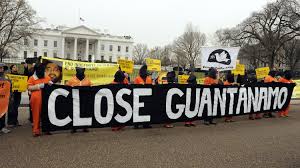 In November 2001, President George W. Bush authorized the detention of any suspected Al-Qaeda members by newly-created military commissions. Anyone considered “unlawful enemy combatants,” would be captured, tortured, and locked up in prison cells at Guantanamo Bay.

January 11, 2015 will mark the twelfth year since the first detainees were sent to the US prison facilities in Guantanamo Bay, Cuba.  Since then, 779 men have been sent to Guantanamo Bay without trial and have been jailed without ever having been officially charged with any crime. As of November 2013, over 160 prisoners remain locked up, most of whom have been detained there for over seven years.

During his first presidential campaign in 2008, President Barack Obama stated that he would close the doors of Guantanamo Bay by 2010. Since his election, the facility has remained functional, prisoners continue to be tortured, and hundreds of prisoners have taken part in hunger strikes to protest their indefinite detention and deteriorating conditions.

The South Florida community is organizing an action to demand that Guantanamo Bay be closed; end torture of prisoners; stop force-feeding hunger strikers; release detainees who have not been charged with crimes; transfer cases to Federal Court if legitimate evidence exists; and repatriate freed detainees or provide asylum for those who need it

Co-sponsor duties include having 1 representative of your organization actively involved with planning the action, providing materials either monetary donations or bringing signs on the day of the action, publicizing the event (via social media and by flyering and announcing at other events), and bringing out members of the organization to the action. In order to be placed on the speakers’ list these duties must be met.

The permitted march will begin at the corner of NW 36th Street and NW 87th Ave at 2PM and march to Southern Command (SOUTHCOM) for a rally with speeches from some amazing organizations and activists.