Every year on April 22nd, people celebrate and honor Earth Day through neighborhood clean-ups, community festivals, and projects to educate the public about the need to reduce our carbon footprint. Veterans For Peace has honored Earth Day by discussing how militarism impacts the environment. We hope to spread the message about the environmental costs of war, a topic that isn’t often discussed when leaders debate climate change and enact environmental policies. Instead of working for a cleaner, cooler future, our tax dollars are being spent on human death and environmental destruction.

For centuries, war has not only involved the annihilation of human life, but also environmental destruction, in the forms of both 'collateral damage' and deliberate damage to environments. Modern day warfare and technological advances have increased the ecological disturbances associated with war, both in the manufacturing and development of weapons.

“The environment has long been a silent casualty of war and armed conflict. From the contamination of land and the destruction of forests to the plunder of natural resources and the collapse of management systems, the environmental consequences of war are often widespread and devastating.” -Ban Ki-moon, UN secretary general 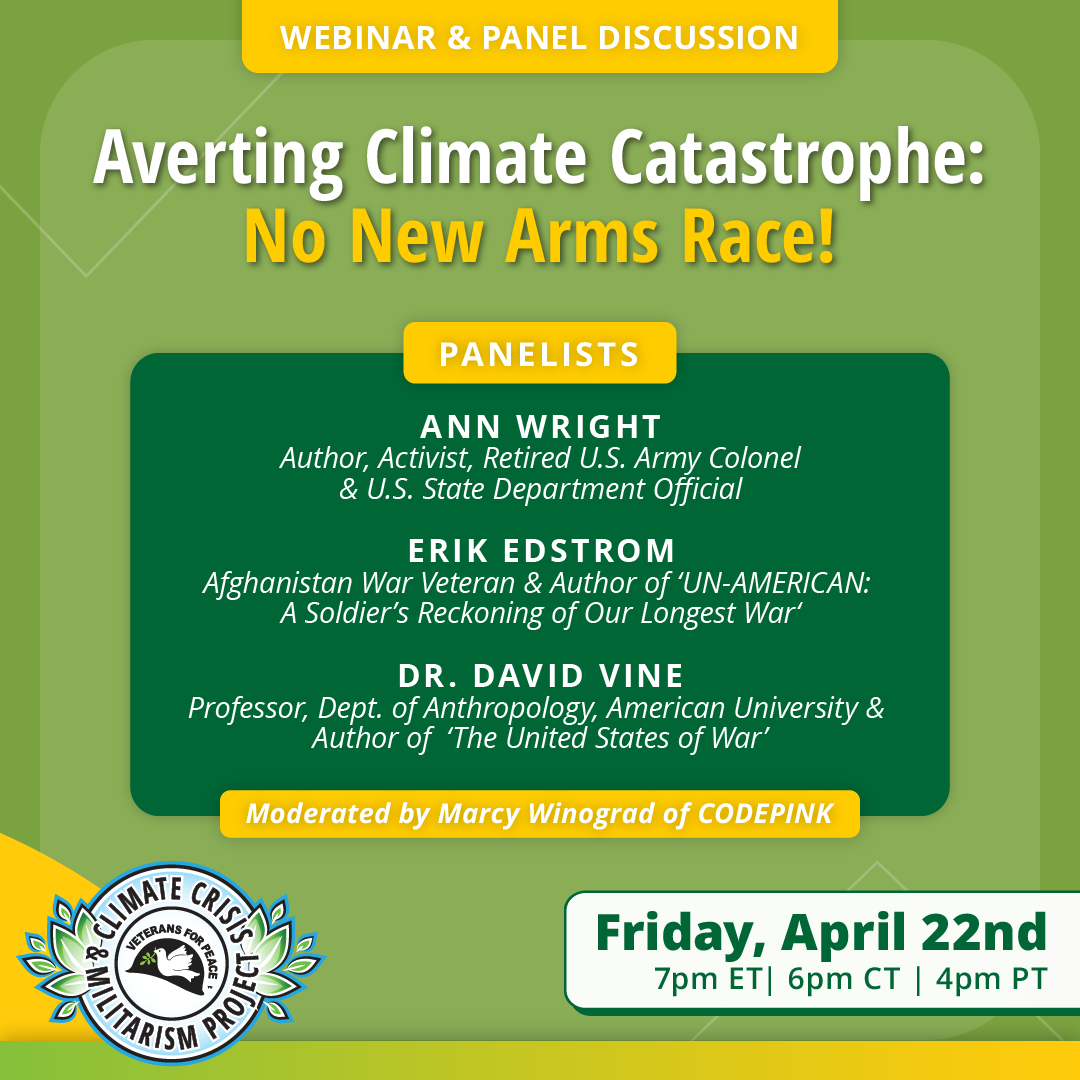 The webinar, which is moderated by Marcy Winograd of CODEPINK, features panelists:

Panel discussion will be preceded by a brief presentation by CCMP members describing the links between the Ukraine war, militarism, and the worsening climate crisis.

Register for the webinar here!

Veterans For Peace launched our Climate and Militarism Project last year.  The goal of the project is to educate and mobilize about the cost of war and militarism as it relates to the Climate Crisis and the increase of greenhouse gases.

Our areas of focus are:

Therefore, we will educate and mobilize fellow veterans, journalists, politicians, environmental organizations and activists, workers and the public about the relationship between the military and the climate crisis.
Visit VFP's Climate and Militarism Project to plug into ways you can get involved throughout the year!

The War Industry Resisters Network is a new coalition of groups opposing their local war companies, joined together to focus on corporate control over US foreign policy.

Organizing for the new War Industry Resisters Network is full speed ahead and with the strong link between militarism and climate crisis, many folks are combining their Earth Day and WIRN actions. We've had over a hundred folks join our organizing calls and over 500 join our previous webinar. Join us as we continue to resist the dangerous war profiteering companies.

Check out the list of events and find one near you!

Get more information on the War Industry Resisters Network