Veterans For Peace has been celebrating Armistice Day almost since the organization's inception, with a few chapters doing yearly events.  However, in 2008 the effort became a national effort with the passage of an official Veterans For Peace resolution.  Since then, chapters across the country have been "Reclaiming Armistice Day" pushing the celebration of peace into the national conversation on Veterans Day.

This year on Armistice Day, Veterans For Peace chapters across the country mobilized around the country to lift up peace!  Some used the opportunity to call for peace with Korea, by releasing a People's Peace Treaty with Korea and chapters across the country mobilized in an effort to stop more war.   Veterans also lead a Veteran march at the border calling for an end to all U.S. militarization on the border and throughout Latin America.

Upload your Armistice Day photos to the VFP Google Folder 2017! Simply add photos by clicking the "add to album" icon in the top right corner.

If you have a report you'd like added, email Colleen! 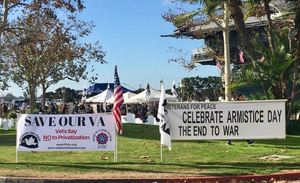 Chapter 27, Twin Cities
Dave Logsdon
“At the Minnesota History Museum, they closed their wonderful WWI exhibit by having us have an Armistice ceremony outside the exhibit. We rang our bells sang our songs, and talked about why we ring the bells. John Varone, our Native American Treasurer, ended the ceremony with a ringing performance of Phil Ochs' "I Ain't-a-Marching anymore". They invited us back for the 100th year celebration next year!”

San Diego Veterans For Peace
Gary Butterfield
“Thank you all who came out and helped make our Hometown Arlington West display a HUGE success this past Saturday. I counted 24 Vets and supporters who came out and participated at some point during the day. There were lots of meaningful contacts and emotional moments. Such a large turnout made setting up and tearing down the display much easier. .
Here is a link to the interview with KUSI.”

Chapter 101, California
Phil Pflager
"There were fifty or more members of the peace community participating in the Saturday November 11 VFP101 Armistice Day Commemoration; attendance gets better each year. Tucson, Arizona VFP Chapter 13 member Clark Lohr rang the bell at 11am; it was his second year to attend the San Jose event. After a moment of silence I spoke about the November 11 holiday being changed from a day dedicated to world peace to a day promoting war through the recognition of veterans. The Raging Grannies then delighted the crowd with several of their songs followed by the Dance of Peace. San Jose's own Peace Dancer Khalilah was unable to attend the Saturday event as planned so she sent her students from the dance class that she holds at the San Jose Peace and Justice Center to fill in. Sharat Lin led the student group and many in the crowd joined with them to celebrate in the dance. Tony with his trumpet joined by Lynne Bartholomew and her melodeon harmonica closed the event with music to uplift the soul."

As you can see from the photos the weather was perfect, Armistice Day was commemorated, and a good time was had by all. 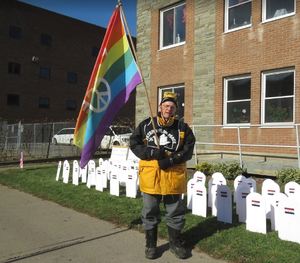 Check out the amazing photos!

Check out some of their press coverage:

Chapter 157, North Carolina
“Many thanks to all who showed up on this sub-freezing morning to add our presence and our "NO MORE WAR" message to the annual Veterans (Armistice) Day parade in Raleigh. Our contingent of 15 included members Babs, Barry, Doug, Jim, Leedom, Nancy, Paul, Sam, Sue, Vicki, and Zach, and some family members, as well. We were well received, with lots of friendly peace signs flashed our way from onlookers.  After completing the route, we gathered at the Bell Tower where we had a brief bell ringing ceremony with Roger and more onlookers. Again, I send my thanks to all! Veterans For Peace!”

Also, check out the letters to the editors members wrote to the Governor!

“Perhaps the most radical but most healing aspect of our Belltower is the inclusion of inscriptions memorializing the suffering of our “enemies.” I added inscriptions for both my grandfathers. Another memorial plaque was dedicated by U.S. Marine Corps veteran Mike Hanes to “The Iraq citizen who died in one of our raids. Died in my buddy’s arms. An image I will never forget.

This Armistice Day, let us – at long last – beat our swords into plowshares.”

Check out some of their press coverage: 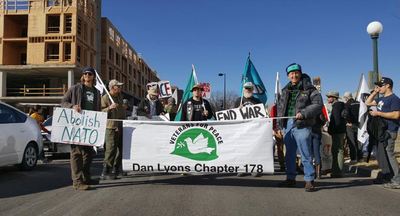 VFP 120 Boulder Colorado, VFP 178 Northern Colorado
Both chapters joined with IVAW, and the Rocky Mountain Peace Center in the Veterans Day Parade in Denver. Organized by veteran Travis Weiner, 30 of us marched and received a lot of positive feedback from the crowds along the parade route.

VFP Boston
The VFP Boston Chapter had their annual march and rally that followed the annual Veterans Day Parade in opposition to the traditional glorification of war on Armistice/Veterans’ Day Their parade concluded outside Faneuil Hall, where members of the organization waved flags and sang Woody Guthrie’s “This Land is Your Land,” as the Boston Area Brigade of Activist Musicians played the tune.
Read Paul Atwood’s remarks from the rally!
Stop the Insanity and Negotiate Peace in Korea Before It is Too Late! 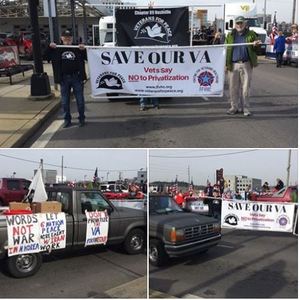 Veterans For Peace, Nashville, TN
Harvey and Jim
“Here’s a pic of us with the Save Our VA Banner at the Nashville march on Saturday.
The crowd loved it, judging from the applause and fist pumps among the crowd! We distributed the quarter - page flyers to to the 100+ Iraq and Afghan War veterans who we served breakfast to before the parade. On behalf of VFP Chapter 089, thanks for all your work pulling this together.”

Make sure to check out Nashville’s VFP Radio Hour on Armistice Day: As Armistice Day (Veteran's Day) looms the Veterans for Peace discuss endless war and militarism., seen by the Authorization for the Use of Military Forces (aumf). We also discuss the threat of war with North Korea. 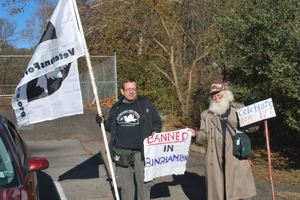 VFP members Tom Palumbo and Michael Kane walked 11 miles in 2 states, and 4 towns with a message of reclaiming November 11th as Armistice Day and asking the public to join them on their quest. They have also called for faith communities to commemorate the event with ringing of
church bells at 11AM.

Beginning in the Waverly Glen at 10AM they will be made a silent pilgrimage through the valley to encourage residents to reflect on the original designation of November 11th as Armistice Day rather then its current designation as Veterans Day.  Their route took them through Waverly NY, South Waverly, Sayre and Athens PA and back.