WASHINGTON, D.C.- On Wednesday, August 3rd, seven military veterans and supporters were arrested near the U.S. Capitol Building. Members of Veterans For Peace, an organization of over 120 military veteran chapters worldwide, gathered at the foot of the Capitol demanding more robust action on addressing the climate crisis. 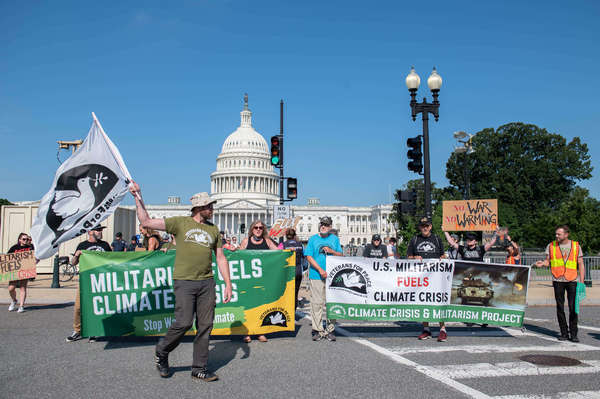 Veterans For Peace demands that the President and Congress:

"The military has done next to nothing to reduce their carbon footprint, either ignoring the climate mandate completely or just focusing on creating more advanced weapons systems that can continue to operate under worsening climate conditions. From the burn pits to nuclear waste to water contamination in Hawai'i, the U.S. military is responsible for an unprecedented amount of climate disasters. It is past time for Congress and the President to hold the U.S. military accountable for their catastrophic effects on the planet." -Garett Reppenhagen, Executive Director of Veterans For Peace, U.S. Army, Cavalry/Scout Sniper, OIF Veteran.

"I chose to risk arrest today because as a Marine who served in Afghanistan and Iraq, I saw firsthand the devastation that the military has wrought on countries around the globe, including just 48 hours ago when the U.S. military issued yet another drone strike on Afghanistan. The U.S. spends unprecedented amounts of money on an ever-expanding U.S. military, using veterans like me as pawns in their justifications for more money. We need to be reducing U.S. militarism and redirecting that money towards climate solutions like renewable energy and resources that meet human needs." -Chris Velazquez, OIF/OEF Veteran, 2004-2010

For Photos of the Event

"As a retired research geologist I fear the climate crisis. As a veteran, I know our military fuels this crisis and they have no accountability for their actions. It is too late for more talk, we need immediate action." -Jim Rine, U.S. Army, 1970-73

"As a lifelong resident of Hampton Roads, Virginia, which has the largest naval institution in the world, I've seen the domestic environmental harm the military causes in my own backyard. From the dumping of jet fuel into wetlands in Virginia Beach to the contamination of our waterways from shipyards, it's important to recognize all impacts of incessant militarism and say no to the military's war on the climate." T.J. Thompson, U.S. Navy, 1998-2004, deployed to South America, Mediterranean Cruise and the invasion of Iraq

"It is totally irresponsible for our government to spend billions of dollars funding wars abroad that accelerate the climate crisis while people are suffering at home without housing or food." -Jeff Parente, U.S. Marine Corps, 2006-2014, OIF Veteran

"The money needed to avoid the worst results of climate change, as well as many other social issues that lack adequate funding, is the wasteful and bloated military budget. Not only that, the U.S. military is the greatest contributor to mounting ecological catastrophe." -Joshua Farris, U.S. Army, 2000-2004, OIF veteran

"We've passed the point of return for our climate and our world. I am here because I know that we must do everything we can to mitigate the worst of what is to come. We must not sit back in apathy and hopelessness. The time to act is NOW." -Stephanie Atkinson, U.S. Army Reserve, 1984-1990

"As a veteran I have seen first hand the waste of the U.S. military. I have also watched Congress say that they care about veterans and active duty members of the military as an excuse to enrich lobbyists and military contractors, while defunding any military benefits. Since leaving the military I have become a land conservation advocate and I believe I have a responsibility to speak out against U.S. militarism and the pollution that the military creates." -Mike Marion, U.S. Army Corps of Engineers, 1988-90, Panama

"One of the ways I atone for my actions when I was in the military in Iraq, before I knew any better, was to work towards a better world.  I want future generations to have a chance to live in a world that is not on fire."  -Jules Vaquera, U.S. Air Force, OIF Veteran, 2000-2006