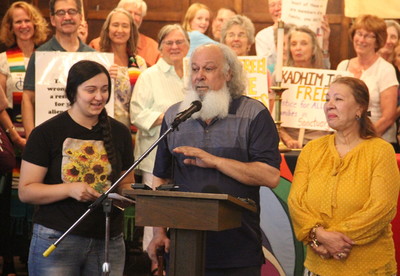 Two years ago, Immigration and Customs Enforcement (ICE) officers stalked Mr. Al-bumohammed at his home and followed him to his lawyer’s office. He was then called and told to report to the local ICE field office, months before his next periodic check-in date. June 26 is the 2-year anniversary from that check-in when a peaceful gathering outside the ICE field office, caused them to shut down operations for the day.

Kadhim Al-bumohammed joined a class-action lawsuit that halted the deportation of more than 100 Iraqis nationwide who fear torture and persecution should they be removed to Iraq. The other members have been released from detention over the last two years but, despite being a class member to the lawsuit, because Mr. Al-bumohammed had sought Sanctuary after being followed by ICE and was thus never detained, he was still at risk of detention should he leave the church basement where he lived in Sanctuary. With a decision that finally came from the Board of Immigration Appeals, his deportation order has been removed and he is able to reapply for permanent residence through his US Citizen son and wife.

Al-bumohammed worked as a contractor with all four branches of the U.S. military from 2004-2009 as a linguist assisting the US military in cultural and familiarization programs at the National Training Center at Fort Irwin, CA.

“American soldiers have told me that the training I gave them saved their lives. I fear if I am deported my life is at risk,” said Al-bumohammed in 2017. “I don’t understand how this can be happening.” 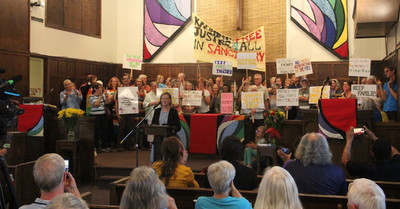 He has more than 15 medals awarded to him during his years as a contractor with the US; he estimates that he trained tens of thousands of soldiers in his five years.

In 2017, the American Civil Liberties Union (ACLU) won an injunction which stopped the deportation of more than 100 Iraqis living in Michigan. The ACLU of New Mexico joined the lawsuit on behalf of another local man from Iraq who was held in an ICE detention center in El Paso, TX.

For two years, the New Mexico Faith Coalition for Immigrant Justice (NMFCIJ) coordinated 24-7 accompaniment in which hundreds of community members took 4- or 12-shifts, many volunteering weekly, to ensure that someone would bear witness should ICE attempt to enter the church and detain Mr. Al-bumohammed.

“We have witnessed our schools become more militarized, our communities become militarized, and the border militarized—all for the sake of protecting freedom. There is a saying, ‘Freedom isn’t Free.’ The truth is, none of us are free, as long as the military—and those in power—who abuse their positions continue to oppress, to silence and terrorize each and every one of us,” noted Monique Salhab, an Albuquerque resident who served in Iraq 2005-2006 and again 2008-2009 with the US Army Military Police. Ms. Salhab is a volunteer with the NMFCIJ, a member of Veterans For Peace, and co-director of the Albuquerque Center for Peace and Justice. 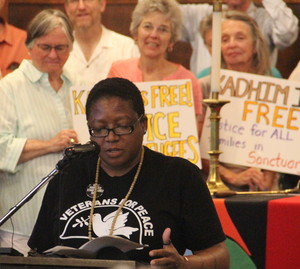 Today marks one year since the U.S. Supreme court decision of Hawaii vs. Trump, to uphold the Muslim Ban. Next week, millions of Americans will celebrate in grand pomp and circumstance, so-called independence on July 4th. One act relinquished and greenlit  “religious and ethnic discrimination” https://www.nomuslimbanever.com directed toward millions of individuals living in the United States; while the other, celebrates the lie we are all free and the American flag as a symbol of that lie.

This administration and the ones before it, have illustrated a willingness to utilise the U.S.  military as the occupation force abroad and here in the United States; and under this administration, we have witnessed CPB and ICE become the gestapo branch of this occupation force. The U.S. military - under the auspices - of whichever political puppet wins office, has systematically been used to occupy, control and usurp countries, communities and any organised force which opposes U.S. colonialism.

In New Mexico state, Native/Indigenous communities have been fighting this colonialism for centuries. The development of Kirtland, Cannon and Holloman AirForce Bases; Fort Bliss in El Paso which spans over 1 million acres, the National Labs and Los Alamos, White Sands Missile range. In the last 28 years, American public schools have become a military recruiter’s playground. In Albuquerque, all 13 public schools have a Junior Reserve Officers' Training Corps (JROTC) program - which is a federally funded program sponsored by the U.S. Armed Forces. CNM, NMSU, National American University and The Art Center Design College, all have active Reserve Officers' Training Corps (ROTC) programs; and the New Military Institute is a state supported military school.

The Oath of Citizenship contains an identical sentence, which is in the Oath of Enlistment: “I will support and defend the Constitution of the United States against all enemies, foreign and domestic; that I will bear true faith and allegiance to the same…” So how do we as organizers, citizens and veterans defend against this terrorist called the U.S. military? We resist the mainstream narrative to dehumanize. We must act from a place of compassion and love. We must recognize the strength individuals like Kadhim has exhibited in the face of terror. Every individual flowing through our borders, those in sanctuary and the many unnamed, are human beings. I took the Oath of Enlistment and each day when I step out into the community, I pledge to expose the lies of militarism. Thank you Kadhim and thank you to his family. Thank you for being a living reminder of what heroism looks like.

Let’s make sure our communities have the right information.  Share the information below and bring people together to discuss.

We must vigorously demand #NoCamps #NoRaids. And make sure those in political office are doing everything they can to fight back – no money, no access, and no excuses for colluding with ICE.