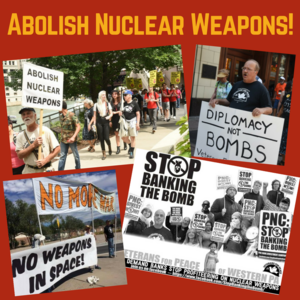 "The End is Near" are ominous words carried by religious zealots, pessimists, and prophets of doom. Those who are sane, optimistic, and working actively for peace do not want to look like alarmists. Nonetheless, well-informed people know we are facing imminent death on a massive scale. Climate Disaster is unfolding rapidly before our very eyes. Then there is Nuclear War. Either one could put an end to human civilization.

What these two existential threats have in common is that the powers-that-be are doing almost nothing to address them, except to make them worse. Nero is fiddling while Rome burns. At least there is much public discussion about Climate Change.

One does not hear much these days about the growing danger of Nuclear War. Yet recent developments are, in fact, quite alarming, especially taken together:

On the plus side, South Africa just became the 21st country to formally ratify the UN Treaty on the Prohibition of Nuclear Weapons. As soon as 50 nations do so, it will become international law (and any nation using, threatening to use or even possessing nuclear weapons will be an outlaw).

Nuclear resisters persist. The Kings Bay Plowshares 7, courageous activists who were arrested after entering the Nuclear Submarine Base in St. Mary's, Georgia last April 4, continue to show a good example.

In May, the historic Golden Rule peace boat, a national project of Veterans For Peace, will head for Hawaii, the Marshall Islands and Japan, sailing for a "nuclear-free future and a peaceful, sustainable future."

Several chapters and members of Veterans For Peace are planning new initiatives for nuclear disarmament. VFP will be revitalizing our Nuclear Abolition Working Group. All those who are interested, should contact me at gerrycondon@veteransforpeace.org.

Keep on Waging Peace! It is more important than ever.