One of the founding principles of Veterans For Peace is a call to end to the arms race leading to the ultimate elimination of nuclear weapons.  We have been working towards nuclear disarmament for many years, but the last few years we have been stepping up our work towards nuclear abolition.  We continue to support the historic Golden Rule antinuclear sailboat, a national project of Veterans For Peace, whose upcoming voyage will focus on Hawaii, Guam and the Marshall Islands.

There are a number of ways to support VFP’s Nuclear Abolition work!  To stay more connected, join the VFP Nuclear Weapons Working Group.

The Treaty on the Prohibition of Nuclear Weapons, (TPNW)

It was adopted by the United Nations in July of 2017. The Treaty makes it illegal to develop, test, produce, manufacture, acquire, possess, stockpile, transfer, receive, use or even threaten to use nuclear weapons or explosive nuclear devices.

122 countries voted to adopt the Treaty in July 2017.  The United States led a boycott of the negotiations and refused to sign, along with other countries with nuclear weapons.

Veterans For Peace is a member of ICAN, (International Campaign to Abolish Nuclear Weapons).  ICAN is a coalition of non-governmental organizations in one hundred countries promoting adherence to and implementation of the United Nations nuclear weapon ban treaty.  As a member, Veterans For Peace is dedicated to pressuring the United States to sign the treaty.

The Treaty for the Prohibition of Nuclear Weapons will be two years old on January 22. We are encouraging each chapter to join a coalition of peace groups to help recognize the importance of this treaty, this anniversary, to educate the public and demand the US sign on.

The website OREPA.org has a full description, including resources such as downloadable banners, hand-outs, posters, letter to the editor templates and more.

Low-cost banners are available and easy at bannersonthecheap.com and we have attached a VFP logo that you can add to any banners, posters and handouts you decide to use.

Ralph Hutchison, of OREPA, was on Jim and Harvey's Podcast to discuss how important the treaty is and how important it is to educate the public about it and to demand that the US sign on. Listen to the interview!

The corporations manufacturing nuclear weapons are fueling the nuclear arms race for their own financial gain. They actively lobby their parliaments and governments to continue allocating the funds to nuclear weapons. And they support think tanks and other public initiatives to promote the ‘need’ for nuclear weapons maintenance, modernization or expansion.

You can help curb the power of the nuclear weapons corporations by encouraging your university, church, city, bank or government to divest from nuclear weapons.

Check out this great campaign co-led by one VFP’s chapters!

Veterans For Peace has endorsed the Restricting First Use of Nuclear Weapons Act of 2017, currently languishing in the House Committee of Foreign Affairs.  However, Senators Markey (D-Mass) and Re. Lieu (D-Calif) continue to advocate for its passage. You can help by calling your Congressional Rep today and demand that it be passed!

Veterans For Peace continues to educate the public, schools and community groups about the dangers of nuclear weapons.  Make sure to check out our resources in the side bar!

Veterans For Peace Golden Rule Project has a number of speakers that are available to talk with your group about nuclear issues!  (Helen Jaccard, 206-992-6364, to make arrangements).

Speak out Against Nuclear Weapons and Nuclear Sites! 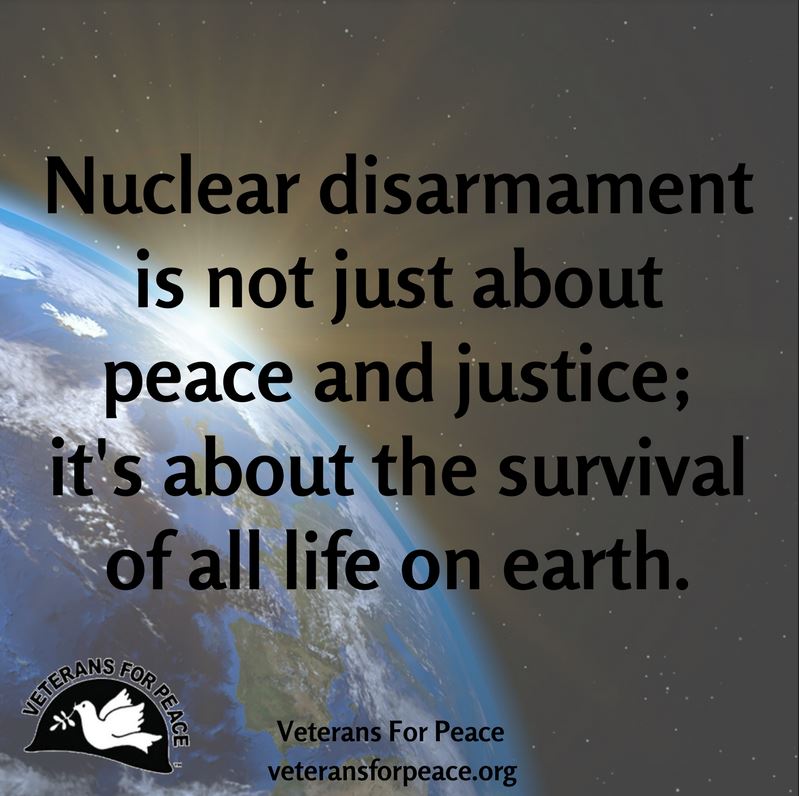 Many chapters will participate in memorial services over the week of August 6-9th.  VFP has created some resources, including a handout of our statement.

To request print-outs, contact Samantha by emailing samantha@veteransforpeace.org or fill out this form!