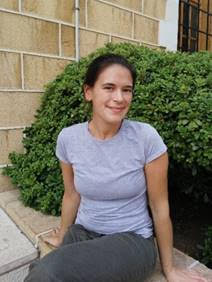 Shelby Surdyk of Skagway Alaska has been selected to plan and coordinate an International Youth Congress for the Global Elimination of Nuclear Weapons which will be held in Juneau in 2020.

"Being involved with the Youth Congress would be a dream come true for me" Surdyk wrote when she learned about this project. "I want to build opportunities for Alaskan students to grapple with the grave and important topics of nuclear weapons proliferation."

"Abolishing nuclear weapons is a core principle of VFP" said Chapter President Craig Wilson. "We strongly support the Youth Congress goal of building an international youth movement that will create a nuclear weapons free world for the future, and we believe Shelby is ideally suited to help achieve this goal."

While working on her master's degree at the American University of Beirut (Lebanon), Surdyk has been studying the health impacts of depleted uranium weapons on the Iraqi population. "I see my thesis and the Youth Congress as overlapping projects" she said. "The peace organizations with which I am communicating are part of a network that can be drawn upon for the Youth Congress."

Surdyk's education and experience in this field began in 2007 with a high school project called Students Educating for Nuclear Awareness. It included a theatrical description of the US Nuclear Testing Program in the Marshall Islands which was performed in high schools throughout Alaska as well as the Marshall Islands. The project culminated in a three-day World Nuclear Awareness Conference at the University of Alaska Southeast.

During her undergraduate work at the University of Alaska Fairbanks, Surdyk volunteered in UAF's gamma-ray spectroscopy lab where she prepped marine mammal tissue samples collected by Alaskan subsistence hunters who were concerned about possible radionuclide contamination following the meltdown of the nuclear plant in Fukushima, Japan. For her senior thesis, she led a community-based radiation monitoring project in her hometown of Skagway.

The Youth Congress is co-sponsored by the University of Alaska Southeast and the Juneau People for Peace and Justice. The conceptual idea was developed by former Juneau Mayor Bruce Botelho. It will be funded, in part, by a grant from the Ploughshares Fund, which has supported such projects for more than 35 years, and supported by the Alaska Fellows, a program created by Rep. Jonathan Kriess-Tomkins to place dynamic recent college graduates with organizations across Alaska.

On October 14, Surdyk will be in Juneau for the official project launch with the screening of the documentary film "The Man Who Saved the World" at the University of Alaska Southeast Egan Lecture Hall at 4 pm. Starring Robert De Niro, Matt Damon and Kevin Costner, it "tells the gripping true story of Stanislav Petrov - a man who single-handedly averted a fullscale Nuclear World War" by preventing a Soviet Union nuclear weapons retaliatory response to a false alarm.

Despite nuclear weapons reduction treaties between the U.S. and Russia, the risks of a worldwide nuclear weapons disaster are no less today than when Petrov heroically disobeyed Soviet military orders. "Major nuclear actors are on the cusp of a new arms race, one that will be very expensive and will increase the likelihood of accidents and misperceptions" Rachel Bronson, PhD., President & CEO of the Bulletin of the Atomic Scientists wrote in the 2018 assessment of global threats. "Across the globe, nuclear weapons are poised to become more rather than less usable because of nations' investments in their nuclear arsenals."

Following the film screening, Surdyk will begin work on the international youth congress this important project from Beirut while she completes her master's degree work. She will return to Juneau in January 2019.