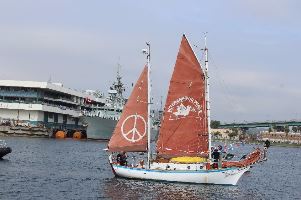 The Golden Rule peace boat will visit Ensenada in Baja California, Mexico this week to rendezvous with U.S. military veterans who have been deported to Mexico. The boat will depart from San Diego, California early Tuesday morning, May 22, and is expected to arrive at Ensenada Cruiseport Village Marina on Tuesday evening. On Wednesday and Thursday, the deported veterans will go sailing on the Golden Rule.

In 1958, four Quaker peace activists led by a retired Navy Commander sailed the 34-foot wooden ketch from Los Angeles, California, headed for the Marshall Islands, where they intended to interfere with U.S. nuclear bomb testing in the atmosphere. The U.S. Coast Guard stopped the boat in Honolulu and arrested the crew. An American family in Honolulu on their boat, the Phoenix of Hiroshima, completed the mission into the nuclear test zone in the Marshall Islands, where they were also stopped and arrested.

The unprecedented bold action of these two boats and their intrepid crews helped bring worldwide attention to the health risk of radiation floating all over the globe and getting into mothers' milk, and built support for the Limited Nuclear Test Ban Treaty signed in 1963 by President Kennedy and the leaders of the UK and the USSR. The Golden Rule peace boat is now a project of Veterans For Peace, a nonprofit educational organization which seeks to abolish nuclear weapons and war

"We have two very good reasons to sail to Mexico," said Gerry Condon, president of Veterans For Peace. "First, we will express our solidarity with our brother veterans, who have been unjustly deported and separated from their families in the United States. This is an outrage that we are committed to reversing.  Second, we will celebrate the huge nuclear-free zone of Mexico, Latin America and the Caribbean, a historic achievement that is great example for all of the world," continued Gerry Condon.

The Treaty of Tlatelolco, concluded on 14 February 1967, was signed and ratified by all countries of Latin America and the Caribbean. The Treaty prohibits the development, deployment and testing of nuclear weapons in our region. It also includes a legally binding commitment by nuclear-weapon-States not to use their nuclear weapons against Latin American and Caribbean countries.

Robert Vivar, Co-Director of the Unified U.S. Deported Veterans Resource Center/ VFP- Sgt. Barrios Memorial Chapter #182, "In spite of the present discord of hate and racism, the Golden Rule's voyage to Mexico is a clear message that the people of the United States and Mexico are committed to World Peace and an un-wavering bond of friendship."

Veterans For Peace is a U.S.-based international organization dedicated to exposing the true costs of war and to seeking justice for veterans and the victims of war. The Unified U.S. Deported Veterans are now a chapter of Veterans For Peace in Tijuana, Mexico.