Veterans Travel to Viet Nam on Anniversary of My Lai 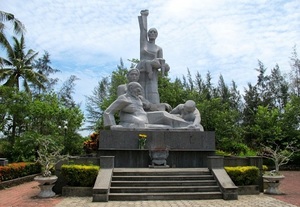 Veterans For Peace (VFP) will travel to Viet Nam March 4th-March 21st. Hosted for the seventh consecutive year by members of Hoa Binh Chapter 160 of Veterans For Peace in Viet Nam, the delegation consists of 39 veterans, spouses, friends.

The tour will be in Quang Ngai Province on March 16 to mark the 50th anniversary of the My Lai Massacre, and March 19 in Ho Chi Minh City for the opening of an exhibit on the GI Movement during the war.  On March 20th there will be dialogue between Vietnamese and American veterans.  In addition, over the 2-1/2 weeks of the tour the group will travel through all of Viet Nam, visiting tourist and cultural attractions, old battle sites, activities and projects that reduce the impact of war legacies including Agent Orange and residual unexploded ordnance UXO.

Susan Schnall, active-duty Navy nurse during the American conflict in Viet Nam, helped to found the Vietnam Agent Orange Relief and Responsibility Campaign in 2004 says, "As an American it's crucial that we help heal the terrible wounds of war our country has inflicted. 50 years later the people of Viet Nam still grapple with the effects of our war."

Paul Cox, veteran and a co-organizer of the trip, "I am a recovering Marine veteran of the war on Viet Nam. I went to war full of ideas and beliefs, and left full of anger and self blame—and against the war. This is my fourth return trip to Viet Nam to attempt to make a small dent in the wrongs that we committed there."

Veterans For Peace mission includes addressing the legacies of America's war. As the only U.S. veterans organization with members living and working in Viet Nam, they contribute to the recovery still underway from the war's consequences.

In addition to VFP's ongoing partnerships in the region, VFP delegations have donated over a $100,000 to such projects. This year participants will contribute at least $1,000 each, and at the end of the tour the group will distribute the funds to projects in Viet Nam.

Interviews available upon request.  Veterans will be in Viet Nam at different periods of time over the course of the month, so interviews are available.