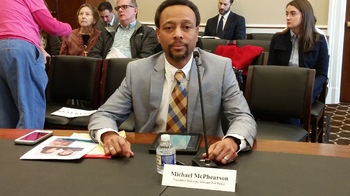 The Congressional Progressive Caucus Peace and Security Task Force and the House Liberty Caucus held a bipartisan ad-hoc hearing on the Authorization for Use of Military Force (AUMF)on Tuesday, February 27, 2018. VFP Executive Director Michael McPhearson testified at the hearing.  Read his full remarks.   The video can be seen here

From the Caucus: "The 2001 AUMF opened the door for any president to wage endless war without further Congressional debate or authorization, and it has been used to authorize military actions far outside the scope of what Congress envisioned when it originally passed. In 2016, the Congressional Research Service issued a report showing that, since its enactment, this authorization has been cited as the statutory authority for military or related actions at least 37 times in 14 countries. While we might not agree on what a new AUMF should look like, we can all agree that the overly broad and outdated AUMF represents a critical deterioration of Congressional oversight. While our brave servicemen and women are deployed around the world in combat zones, Congress is missing in action when it comes to its Constitutional duty. It is past time for Congress to do its job."