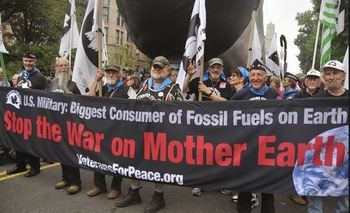 Today, 6 November, has been since 2001 the official United Nations International Day for Preventing the Exploitation of the Environment in War and Armed Conflict (A/RES/56/4), a sadly little known day. I ruefully smile at that verbose UN-speak, but yes, war and conflict are VERY bad for the environment. I would prefer that the "and" was followed by "Preparation for War", because training and weapons testing are also terribly damaging.

The UN is pretty good at acknowledging problems, though sadly, with intentionally no enforcement mechanism and financially dependent on dues slackers like the US so funds are scarce with Trump refusing to pay up, implementing its solutions is a dream deferred. But the very first line of the Preamble of the UN Charter establishes the intention first of all "to save succeeding
generations form the scourge of war". Those post-WW2 idealists knew where the problems lay, but 72 years ago the earth still seemed able to absorb and repair war damage. Not so much any more.

A few vignettes can represent. Photos my anesthesiologist husband took on a slow day in surgery working with MSF/Doctors Without Borders helping clean out intentionally-contaminated wells in Kosovo in 1999, with images of both human and animal skeletons coming up. The angry memories of Koreans during my US Army service there in 1980, STILL remembering the Japanese denuding Korean forests as occupiers from 1910 to 1945. Agent orange defoliant STILL poisoning and deforming Vietnamese and US children several generations after that war. Depleted uranium scattered in the Balkans, Iraq and other recent war sites, and at weapon testing grounds, causing cancers and deformities but still not even admitted to be a health problem. Every battlefield at least as far back as the US Civil War STILL with unexploded ordinance and/or landmines which STILL explode and kill long after the official wars. The US military is recognized now with climate crisis worries to be the single biggest organization consuming fossil fuels, and therefore cranking out carbon pollution, IN THE WORLD. An old statistic I have quoted in talks, which I'm sure is worse now, is that a one hour training flight for the F16 fighter plane uses as much fuel as the average US family uses in their cars in a YEAR.

With more and more realization that the environment and climate are nearing an unrecoverable tipping point, this UN day lends itself to speakouts and actions; a day for demonstrations, lobbying legislators, holding informative events, and civil resistance to challenge war, warmongers, and the terrible environmental damage they inflict.

Climate action is fairly widespread, and anti-war work seems to be burgeoning again with the thrilling Treaty to Abolish Nuclear Weapons, though the US anti-war effort is terribly worn down. It is imperative that peace and environmental folks work together. I have been telling environmental organizations who call me for donations that until and unless they acknowledge that military activity, the Pentagon specifically, is a massive threat to the environment, I will no longer donate to them. I sadly understand their hesitation to take on the Pentagon, but I can no longer support that massive blind spot in green groups. And anti-war folks must reach out to cooperate. The earth requires nothing less.

Ellen Barfield represents Veterans For Peace to the United Nations Department of Public Information, is a former VFP Board member and Vice-President, and co-founded the Baltimore (MD) Phil Berrigan Memorial Chapter of VFP. She served in the US Army from 1977 to 1981, and has been a peace and justice activist since 1986.