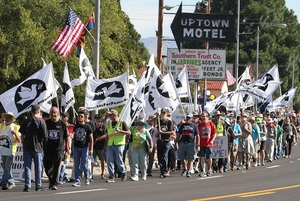 photo by Jonathan Clark
Last weekend, members of Veterans For Peace​ gathered with allies and activists at the U.S.-Mexico border to stand against the militarization of the border and U.S-led violence in Central and South America. Headed by the organization School of the Americas Watch, or SOA Watch​, the border convergence brought attention to U.S. practices and policies that contribute to displacement and violence in Latin America and beyond.
The four-day gathering comprised a broad-spectrum program that brought together labor, faith-based, political, and social justice organizations. The event was held on both sides of the border. On Saturday morning, VFP led a march of over 700 participants to the border. During the Saturday rally, Michael McPhearson, VFP executive director, spoke on the U.S-side of the border, and Hector Barajas, deported veteran and coordinator of the VFP Tijuana Chapter, spoke on the Mexico side. Following the rally, VFP led a workshop on deported veterans on the Mexico side of the border.
Veterans For Peace calls for the closure the U.S. Army program which trains Latin American law enforcement and soldiers who carry out horrendous human rights violations in there respective countries. This program is now known as the Western Hemisphere Institute for Security Cooperation [WHINSEC], formerly known as the School of the Americas [SOA]. The SOA/WHINSEC has graduated over 64,000 trainees, including many military and political leaders accused of an array of human rights violations in their countries. Graduates of the school have been responsible for much of the instability prompting migration in the region. This training program is connected to a larger system of “violence and domination.” We see the connections between immigration and U.S foreign policy, and call for the demilitarization of the U.S/Mexico border.
Veterans For Peace is a long time supporter of SOA Watch, which began in 1990 as a small cluster of dissenters under the leadership of Father Roy Bourgeois​, member of Veterans For Peace. SOA Watch has since grown into an international movement, with bases in the United States, Chile and Venezuela. For 25 years, the convergence took place outside of Fort Benning, GA, the orginial site of SOA. This is the first year which the convergence has taken place at the border.
Watch recordings from the event and read SOAW's recap here!
Executive Director Michael McPhearson's remarks at the Saturday rally:

"Tear Down the Wall. No more deportations. Hello family. I call us family because we are the rainbow colors of humanity. We are inseparably connected and our futures depend on each other. Why are we here? We are here to proclaim our humanity and demand its recognition. We are here to resist U.S. and global policies that breed injustice. We are here to mourn those who have died in the U.S., Mexico, Central and South America and around the world because of these policies motivated by greed. And we are here because we know peace is possible and we demand and work for peace both at home and abroad.

I come to you representing Veterans For Peace, a group of veterans who have trained for and fought in U.S. wars. We know we have been used as tools to separate people from each other. We have been lied to and used to keep in place international oppression to benefit a greedy few. Today we work for global peace. And we understand there is no peace without justice.
Our military experience has changed all of us and broken some of us. Many of my vet brothers and sisters have been abandoned, thrown away and deported. Those who direct this immoral system don’t care about veterans or anyone else. This is why veterans like Hector Barajas, founder of the Deported Veterans Support House, and vets in Veterans For Peace and Iraq Veterans Against the war help each other, reach out to veterans across the globe and stand in solidarity with struggles in the U.S. and around the world.

Today we celebrate our power. We celebrate our collective resistance to injustice and our community effort to build a new way of life. We celebrate the uprisings and rebellions in the U.S. and around the world against oppression and greed and for self-determination and justice. We know that we are not alone and it is clear to us that together in time through persistence and perseverance, like my ancestors who endured the darkest hours of U.S. slavery, we will prevail. Power to the people, Power to all of us."