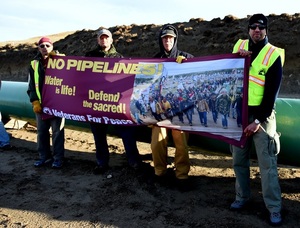 the following is excerpted from:

"STANDING ROCK SIOUX RESERVATION, North Dakota--Indigenous People’s Day in Oceta Sakowin began before dawn with a loudspeaker car driving through the camp urging everyone to “rise and shine; it’s a good day to protect the water.” The speaker encouraged “all my relatives” to gather at the south end of the camp on the Standing Rock Sioux Reservation for a prayer to the sunrise."

"The crowd regrouped near the road with a line of cops in front of them. The dancers continued their presentation, and the crowd chanted “Mni wiconi—water is life!” and “What do you do when your land and water are under attack? Stand up! Fight back!” Members of the Youth Council spoke on bullhorns, urging protectors to be peaceful and not to taunt the police, while also explaining that we all need water to live, and that the protectors were doing this for the cops’ children too. “You can’t drink oil! Keep it in the soil!” they said.

Eventually, all the protectors in the tipi, including Tarak Kauff and Matthew Hoh of Veterans For Peace were taken into custody."

Also be sure to check out Ellen's pictures from her time at Standing Rock.