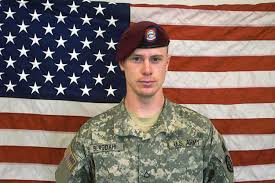 Veterans For Peace is dismayed by the Army’s decision to charge Sgt. Bowe Bergdahl with desertion and endangering troops, for which, if convicted, he could potentially face life in prison.  We believe that Sgt. Bergdahl should be freed from the Army with an Honorable Discharge.

Did Sgt. Bergdahl walk away from his post in Afghanistan?  Yes, by his own account he did so, in order to bring attention to poor leadership which he believed was endangering his fellow soldiers.  Resistance to Mission Impossible takes many forms.  Bowe Bergdahl may not have been explicitly protesting against the war in Afghanistan, but by taking drastic action he sent a distress signal.

Bergdahl is charged with Desertion to Avoid Hazardous Duty, and Misbehavior Before the Enemy, which respectively, carry maximum sentences of five years and life in prison. Charging him with serious crimes in a General Court Martial appears to be a political decision.  It overrides the recommendation of the Army’s own investigating officer, who said that Bergdahl’s actions did not warrant either jail time or a punitive discharge.  The investigating officer recommended, at most, a Special Court Martial which can mete out a maximum sentence of one year in prison.

Bowe Bergdahl is clearly not guilty of desertion.  It cannot be proven that he was attempting to avoid hazardous duty or to remain away from his unit indefinitely.  The Misbehavior Before the Enemy Charge asserts that Bowe Bergdahl’s actions put his fellow soldiers at risk.  It has even been said that soldiers died looking for him.  However, no evidence has been provided to back up this claim.

It was the U.S. government that put our soldiers at risk by sending them to invade Afghanistan and to occupy it for going on 15 years.  Nearly 2,200 U.S. soldiers have been killed in Afghanistan, including six who were killed just this week by a suicide bomber at Bagram Air Force Base.  None of these soldiers died as a result of Sgt. Bergdahl’s actions.

Bowe Bergdahl is being made the scapegoat for the failed policies for the disastrous U.S. occupation of Afghanistan, which has caused the deaths of tens of thousands of Afghan men, women and children.

Bowe Bergdahl remains a Prisoner of War.  Veterans For Peace demands that Sgt. Bergdahl be freed immediately with an Honorable Discharge.

Veterans For Peace is also concerned about the 9,800 U.S. troops who remain in Afghanistan, hostages to a failed policy, with targets on their backs.  The U.S. government should withdraw all U.S. troops from Afghanistan immediately and finally bring that long U.S. war to an end.