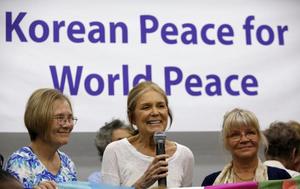 On Sunday, May 24th, International Women’s Day for Peace and Disarmament, a group of more than 30 women crossed the Demilitarized Zone (DMZ) at Kaesong from North Korea into South Korea. Their goal: to draw attention to Korea’s “forgotten” and unfinished war, and move toward a real peace that can reunite families and, perhaps, a divided nation.

The march included both North and South Korean women marching on their respective sides, and was preceded by a peace symposium in Pyongyang (watch North Korean TV coverage here). It will be followed by a similar symposium in Seoul after they cross the DMZ (Saturday evening in the U.S.).

The Korean War (officially 1950-53) stands out for its bloody toll. Some 4 million people, mostly civilians, perished. Although a “temporary” cease-fire was signed, the last 62 years have been marked by a protracted cold war defined by ongoing threats by both sides of the DMZ, decades of profligate military spending, and what is effectively a permanent state of near-war and the fear of attack. The idea to walk from North Korea into South Korea began with a dream that lead organizer Christine Ahn had several years ago. The concept grew after Ahn connected with feminist icon Gloria Steinem who took a public stand in 2011 against the militarization of South Korea’s Jeju island. 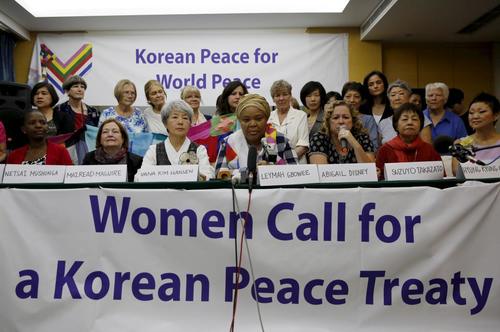 The movement evolved into WomenCrossDMZ as Nobel Peace Prize laureates Mairead Maguire of Northern Ireland and Leymah Gbowee of Liberia joined Ahn, Steinem and what has grown to more than 30 women from South Korea, Japan, the US, Britain, Australia--at least 15 countries, in all.

Gwyn Kirk, a founding member of Women for Genuine Security, and one of the DMZ marchers, says WomenCrossDMZ is intended to create a space for a new type of conversation about ending the Korean war once and for all. After more than 60 years of tit-for-tat provocations, costly and dangerous brinksmanship and outright nuclear threats, Kirk says it’s time to create a different future.

That this movement is organized entirely by women is natural, says Kirk, pointing to UN Security Resolution 1325 which reaffirms “the important role of women in the prevention and resolution of conflicts, peace negotiations, peace-building, peacekeeping, humanitarian response and in post-conflict reconstruction…”

As these women mount a brave effort to do what men have failed to achieve (bring peace to the Korean peninsula), they are also receiving criticism for their efforts. One Korea policy commentator went so far as to call the group “naïve, duplicitous, disingenuous, fatuous, and [stupid].”

CNN’s Brian Todd asked if Kim Jong-un was “in league with a women’s group to bring peace between North and South Korea” and played up suggestions Christine Ahn might be “sympathetic” to North Korea. The Monthly Review responded by breaking down why The Situation Room with Wolf Blitzer did a “hatchet job” on WomenCross DMZ rather than a serious examination of what they set out to achieve. 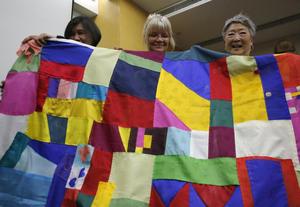