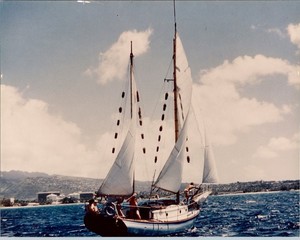 The historic Golden Rule antinuclear protest boat will set sail again, continuing its journey for peace and nuclear disarmament.  In 1958 four Quaker activists attempted to sail the Golden Rule into the seas around the Marshall Islands, in order to halt U.S. nuclear atmospheric testing.  They were stopped and arrested in Hawaii and spent time in jail, but news of their quest went around the world, inspiring others to act.  The 1958 voyage of the Golden Rule is credited with helping to achieve the Partial Nuclear Test Ban Treaty of 1963, which banned nuclear testing in the air, underwater and outer space.

For over four years, members of Veterans For Peace Chapters 22 and 56 on the northern coast of California have been working hard to restore the Golden Rule, after it was dredged up from the bottom of Humboldt Bay.  The Golden Rule is now a national project of Veterans For Peace, with VFP members and allies from all across the country contributing time, money, expertise and elbow grease.

Everyone is invited to a big “Splashdown” celebration on Saturday, June 20,in Eureka, California, where the Golden Rule will be “christened” and hit the water again.  Special Guest speakers from Greenpeace, Physicians For Social Responsibility, Quaker Friends, and Veterans For Peace will be joined by families of the original crew.  First person oral histories will be shared by peace activists such as David McReynolds of the War Resisters League and Shigeko Sasamori, who, at 13 years old, was badly burned by the atomic bomb that the U.S. dropped on Hiroshima, and who has become a leading international advocate for total nuclear disarmament.

The maiden voyage of the restored Golden Rule will be to San Diegofor the Veterans For Peace National Convention, August 5-9, coinciding with the 70th anniversary of the bombings of Hiroshima and Nagasaki.  The theme of the convention is “Peace and Reconciliation in the Pacific.”

Thus will begin a ten year voyage for the Golden Rule.  For the first two years, the Golden Rule will make port stops up and down the west coast carrying on its educational mission for peace, nuclear disarmament, safe, sustainable energy and a clean environment.  For more information on how you can help or even join the crew, visit the website of the VFP Golden Rule Project.