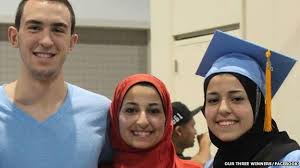 Veterans For Peace deeply regrets the murders last Monday night of three young Muslim students in Chapel Hill, North Carolina.  Growing anti-Muslim sentiment and hate crimes in the U.S. mirror the U.S. war on Muslim countries, and are stirred up by violent anti-Muslim propaganda such as the film, American Sniper.

We send our condolences to the families and friends of these beautiful young people, whose lives were robbed of them at such a young age.

We encourage all VFP members to challenge anti-Muslim racism and violence.  Please read the reflection by Rabia Chaudry, below.